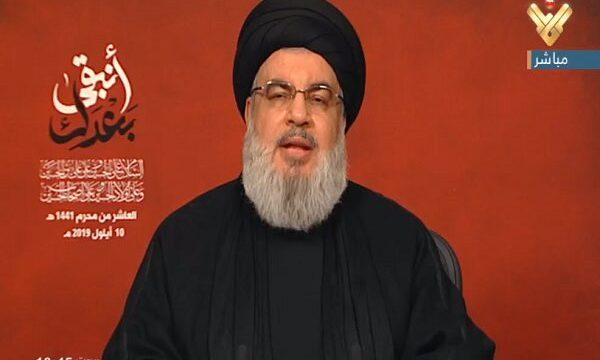 Hezbollah standing by Iran against US, Israel

Addressing a ceremony to commemorate the 9th day of lunar month of Moharram, Tasu’a which is one day before the martyrdom of the third Shia Imam Hussein (AS), Nasrallah told Trump and Netanyahu that neither sanctions nor poverty and hunger will hamper Hezbollah determination.

He said today Ayatollah Seyyed Ali Khamenei is the leader of Hezbollah camp and the Islamic Republic of Iran is the center of this camp that the US tends to put it under sanctions and pressures.

Despite all threats, dangers and sanctions, Hezbollah is determined to follow Imam Hussein (AS) path, Nasrallah reiterated.

“The Hezbollah leader stressed that Iran and Syria were the only two countries supporting the Resistance in its war against the usurper regime highlighting that Hezbollah social sympathizers played an important role through their steadfastness and sacrifices,” Lebanese media Al Manar earlier reported.