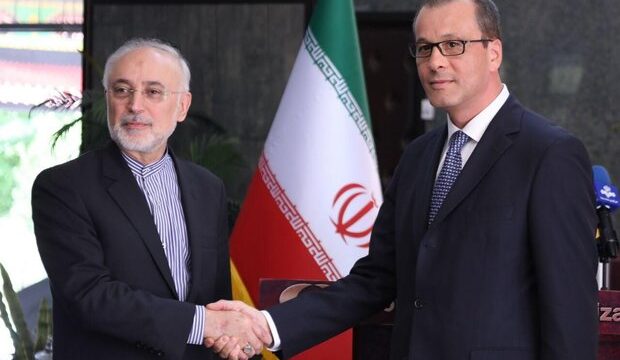 JCPOA a two-way road; EU not fulfilling its promises: Salehi

MNA – Head of the Atomic Energy Organization of Iran (AEOI) Ali Akbar Salehi lamented that JCPOA is not a one-way road and the EU has not fulfilled its promises.

Making the remarks in a joint conference with the visiting Acting Director General of IAEA Cornel Feruta on Sunday morning, he said the EU was expected to replace the US, compensating for Americans withdrawal from the deal, but unfortunately Europeans have not been able to act upon the made promises.

He also announced that the Islamic Republic considers JCPOA not a one-way road adding that “this was expected to be a two-way road and if it remains a one-way road, Iran will take proper decisions as it has taken the three known steps since now.”

This is Feruta’s first visit to Iran after the Romanian diplomat took over the IAEA after its previous director general, Yukiya Amano, passed away on July 22.

Spokesman for Iran’s nuclear energy organization said on Sunday that the country is nearing the stage where it has to quit its technical commitments to the JCPOA if the European side fails to change tactics regarding its own commitments to the deal.