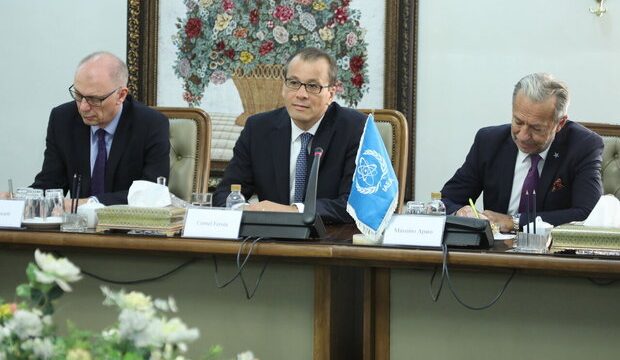 MNA – Acting head of the UN’s nuclear watchdog, Cornel Feruta, said in a press conference today in Tehran that the IAEA is keenly interested in continuing its interactions with Iran.

“The IAEA, on the one hand, is in charge of verifying the implementation of the Joint Comprehensive Plan of Action (JCPOA), and on the other hand, is engaged in an active interaction with Iran for the implementation of the Additional Protocol and the comprehensive safeguards agreement,” Acting Director General of International Atomic Energy Agency, Cornel Feruta, said in a joint press conference with Iran’s nuclear chief, Ali Akbar Salehi, on Sunday in Tehran.

“The IAEA is keenly interested in continuing its interaction with Iran,” he stressed.

“We are ready to keep doing our job in a perfectly professional and impartial manner,” he added.

He went on to stress that the IAEA is an independent, impartial and professional body, and will not be influenced by pressures.

The press conference was held after Feruta’s meeting with Salehi. The UN’s nuclear watchdog then held talks with Foreign Minister Mohammad Javad Zarif.

His visit to Iran came as the country announced its decision to go ahead with the third step of cutting commitments to the JCPOA on Friday.

A year after the US’ unilateral withdrawal from the JCPOA, and in the face of EU’s lack of practical measures to protect Iran’s economy and trade ties against the US sanctions, Tehran announced its decision to row back on its nuclear commitments in compliance with articles 26 and 36 of the JCPOA.

As the first step, Iran increased its enriched uranium stockpile to beyond the 300 kilograms set by the JCPOA. Next, it announced that it had begun enriching uranium to purity rates beyond the JCPOA-limit of 3.76 percent.

The details of the third step was announced by the spokesperson of Iran’s nuclear energy organization on Saturday, which included the activation of 20 IR-4 and 20 IR-6 centrifuges.

Iran says its reciprocal measures will be reversible as soon as Europe finds practical ways to shield the Iranian economy from unilateral US sanctions.