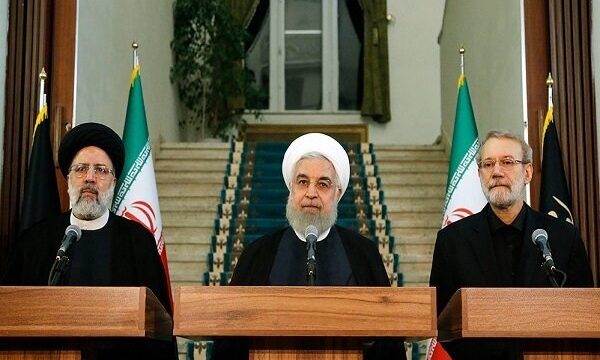 MNA – Iranian President Hassan Rouhani said that the country will take the third step of scaling down nuclear commitments on Friday.

He made the remarks in a press conference held late on Wednesday in a trilateral meeting with Judiciary Chief Seyyed Ebrahim Raeisi and Parliament Speaker Ali Larijani.

Rouhani said, “Atomic Energy Organization of Iran (AEOI) is obliged to set aside all commitments in the field of research and development (R&D) as stipulated in nuclear deal.”

Iran’s measures will be within the framework of rules and regulations of the International Atomic Energy Agency (IAEA), he said, adding, “Europe will be given another 60-day moratorium and whenever they (Europe) live up to their commitments, Iran will abide by JCPOA commitments.”

He seized this opportunity to express his thanks to people who resisted against US economic pressures over the past 16 months.

He added, “there is no doubt that US has failed in the policies of changing, weakening and imposing talks and there is no way for them [US] to go back to the international laws and regulations.”

Since the remaining signatories to the nuclear deal could not live up to their commitments after US pullout from the JCPOA, Islamic Republic of Iran scaled down nuclear commitments within the framework of JCPOA regulations.

“We took the first step in reducing our commitments, and gave the 4+1 a two-month deadline. Then we went ahead with the second phase, giving them another two-month deadline. In the four-month period, we held negotiations with the other sides, including the European Union and the three European signatories to the deal in particular,” Rouhani said.

But since Iran did not achieve the desired result, the third step of reducing JCPOA commitments will be taken as of Friday, Rouhani stressed.

He pointed to the measures taken in the field of reducing commitments in the third step and added, “in the third step, Atomic Energy Organization of Iran (AEOI) will be obliged to immediately start research and development and set aside all R&D commitments stipulated in the JCPOA.”

AEOI is expected to expand its “R&D on various new centrifuges and whatever the country may need for uranium enrichment” at a fast pace, Rouhani highlighted.