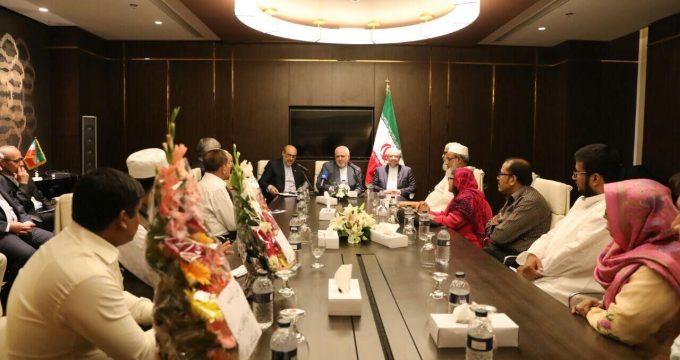 IRNA – Extremism, religious bias as well as Shia–Sunni dispute could not be found in the glorious history of Iran, but it is a so-called history which is unfairly attributed to our nation, Iran’s foreign minister Mohammad Javad Zarid said on Wednesday.

Zarif made the remarks at meeting with the professors of Persian language from Bangladesh, adding that Persian language is a basis for a common culture and it is the indicative of the national identity for all Iranians.

He reiterated that despite the works of other artists around the world, the masterworks of Iranian poets, including Hafez, Sa’adi and Ferdowsi as well as Rumi are still tangible for the readers which are significant reasons for Iranian identity.

Zarif quoted Supreme leader of the Islamic Republic of Iran, Ayatollah Seyed Ali Khamenei, as saying that Farsi is one of the two Islamic languages and if someone is unfamiliar with it, he will be unable to read most of the original Islamic works.

The member of Iran’s Sa’adi Foundation stressed the need for affinity with culture which is a daily necessity, adding those who contribute to the expansion of culture help to the appreciation of the culture-based mutual understanding.