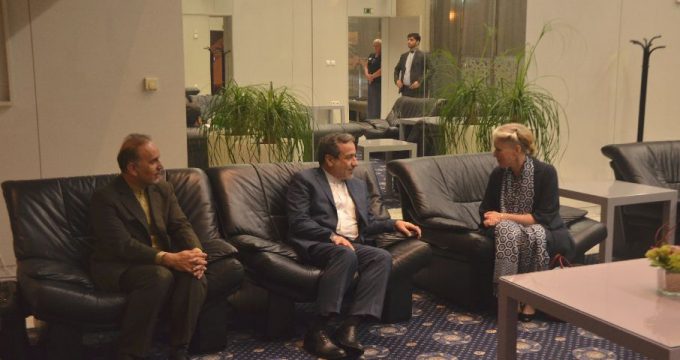 Upon his arrival in Ljubljana, Araghchi was welcomed by a Slovenian official.

During his stay, Iranian diplomat will hold meeting with his Slovenian counterpart and some senior political and economic officials.

He is also to visit some foreign officials on the sidelines of the event.

Earlier, senior Iranian and French experts in an intensive meeting chaired by Araghchi discussed ways to fulfill Iran’s demands and interests in the nuclear deal known as the Joint Comprehensive Plan of Action.

During the meeting, both sides reviewed details of the possible scenarios to promote the initiatives taken by the Iranian and French presidents.

An economic delegation is also accompanying Araghchi during this trip.

Earlier, Araghchi said that export of oil and restoring banking ties are Iran’s basic demand from the parties to the Joint Comprehensive Plan of Action.

Totally, Iran’s foreign policy has been active over the last year since Tehran has taken resistance policy to thwart the US maximum pressure, Iranian diplomat noted.