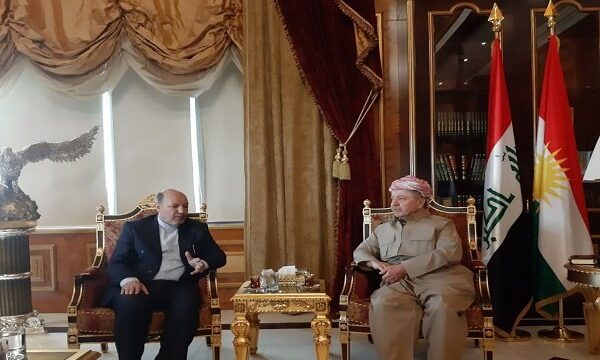 MNA – Massoud Barzani, leader of the Iraqi Kurdistan Democratic Party, has emphasized all-out expansion of relations with the Islamic Republic of Iran.

In the meeting, the two sides discussed bilateral relations and ways to strengthen and expand them.

Referring to the formation and launch of the KRG’s ninth cabinet, Barzani said “I am sure that the KRG relations with the Islamic Republic of Iran will develop in all political, economic, security and cultural areas.”

Rashnoudi, for his part, expressed his appreciation to Barzani for his goodwill and congratulated him on formation of the new cabinet led by Prime Minister Masrour Barzani.

The consulate general stressed the necessity of enhancing cooperation between the Islamic Republic of Iran and the KRG and the expansion of bilateral ties.

The two sides also discussed the latest developments in the region.