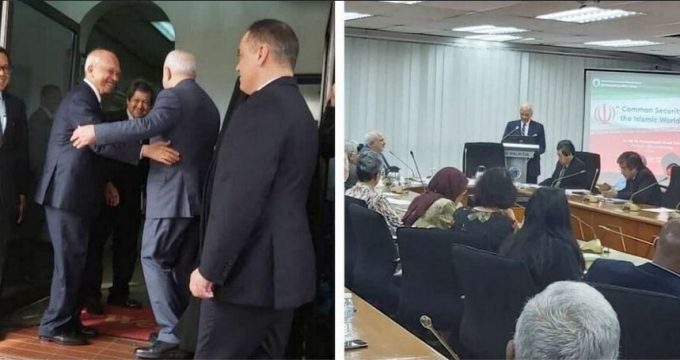 IRNA – Foreign Minister Mohammad-Javad Zarif attended the Institute of Strategic and International Studies (ISIS) of Malaysia on Thursday and answered the questions posed by professors and students of the institute.

Zarif delivered a speech about the prospects of security in the Muslim World to a seminar held in Kuala Lumpur.

The speech included the topics about developments of international relations, features of security and power in the post-Western era. Following he speech, he answered questions about the latest regional and international developments, as well as the policies of the Islamic Republic of Iran.

Zarif arrived in the Malaysian capital of Kuala Lumpur on Wednesday.

Upon his arrival in Kuala Lumpur, Zarif was welcomed by the Managing Director of Malaysian Foreign Ministry for West Asia.

During in his stay in Malaysia, Zarif is to meet Malaysian Prime Minister Mahathir Mohammad and Malaysian Foreign Minister Saifuddin Abdullah.

In his meeting with Japanese counterpart Tarō Kōno, the two politicians discussed bilateral ties as well as regional and international developments, including the conditions in the Persian Gulf and the Middle East, the most recent developments and diplomatic moves with regard to the Joint Comprehensive Plan of Action and other issues of mutual interest.

Before visiting Japan, Zarif had visited China and met with Chinese Foreign Minister Wang Yi to discuss bilateral relations and the most important regional and international ties.

During his stay in Japan, Zarif delivered speech to a conference held at Japan Institute of International Affairs (JIIA) and answered questions posed by Japanese professors, researchers, businessmen and journalists on Iran foreign policy, future of the nuclear deal and the current tension in the region.