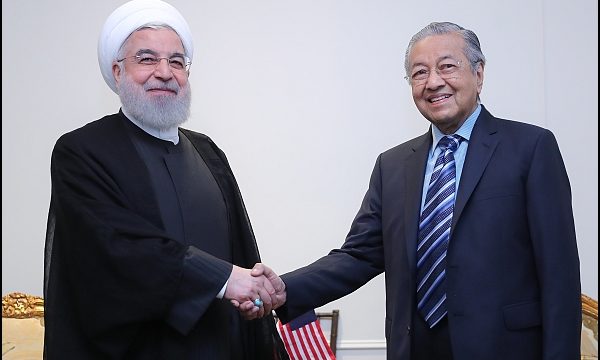 Malaysian PM to travel to Iran in near future: FM Zarif

MNA – Iranian Foreign Minister Mohammad Javad Zarif said that the Malaysian Prime Minister Mahathir Mohamad will travel to Iran in the near future.

Mohammad Javad Zarif made the remarks upon arrival in Malaysia on Wednesday afternoon as the last leg of his three-nation Asian tour after visits to China and Japan.

The top Iranian diplomat said that in the near future, Prime Minister Mahathir Mohamad will pay a visit to Iran.

Speaking about goals of his trip to Malaysia, he hailed Iran’s very good relations with Malaysia, saying “it was necessary to consult with our Malaysian friends on bilateral relations, regional cooperation and cooperation in the Muslim world.”

There have also been many talks between the two countries of Iran and Malaysia in various areas, especially cooperation in the Islamic world, the foreign minister added.

Zarif went on to say that there are areas of joint cooperation between Iran and Malaysia as two major developed countries in the region, which need to discussed and addressed.

He further said that problems that the Iranian students have been facing in Malaysia will be one of the topics of discussions with the officials of the southeastern Muslim country.