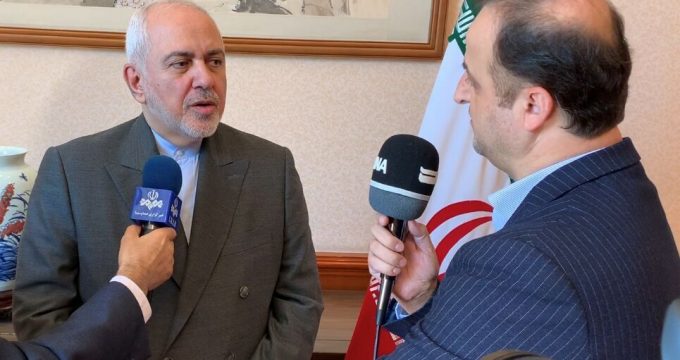 IRNA – No meeting will be imaginable to be held between presidents of Iran and the US until the US honors its commitments to the Joint Comprehensive Plan of Action, Iranian Foreign Minister Mohammad Javad Zarif said on Tuesday.

Zarif made the remarks in an exclusive interview with IRNA reacting to French President Emmanuel Macron’s proposal at a joint press conference in Biarritz, France, ending G-7 Summit about possibility of meeting between the Iranian and US presidents.

What American and French officials say concerns themselves but I told them in Biarritz that no meeting will be held, Zarif said.

Iran completely clarified that US administration has violated agreements achieved through long-term negotiations between Iran and the US, he added.

It is now necessary to implement previous agreements about which we have seen no special indication, he noted.

Elaborating on Biarritz talks, Zarif said meeting was aimed at finding ways to preserve JCPOA thanks to the fact that Iran has implemented all its commitments and has acted upon Article 36 of the nuclear deal.

Unfortunately, Europeans need some permissions for implementing their commitments which in our opinion, it is not a good condition for the future of international relations that the independent countries to need permission from others.

Zarif flew to France on Sunday urgently to hold talks with French President Emmanuel Macron and Foreign Minister Jean Yves Le Drian to discuss with senior officials of the states parties to JCPOA on how to salvage the JCPOA.

He said Zarif traveled to France to further study Prais proposals about the nuclear deal (JCPOA) that were discussed between Macron and Iranian President Hassan Rouhani over the past months.