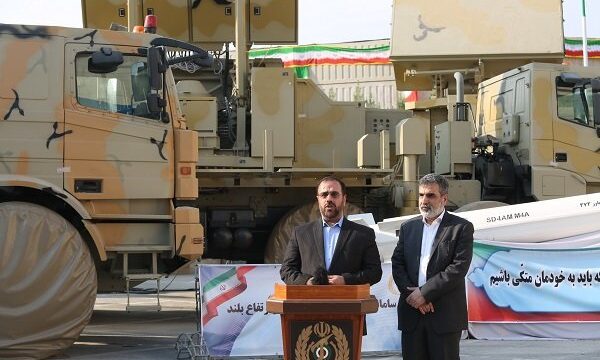 MNA – Iran’s Vice President for Parliamentary Affairs Hossein-Ali Amiri said that Iran’s defense industry has fully developed, given the experiences of the Iran-Iraq war, as well as the country’s conditions.

One of the strategic plans of Iran has been to strengthen the country’s defense industry, said Amiri while paying a visit to the newly unveiled homegrown Bavar-373 long-range air defense system in a defense exposition on Tuesday.

Referring to Iran-Iraq war, he mentioned that Iran’s defense industry has now been fully developed, given the experiences of the imposed war, as well as the country’s conditions.

Amiri noted that one of the most important components of national power is the promotion of defense power, adding that Iranian specialists are capable of developing advanced native defense systems.

The homegrown ‘Bavar-373’ missile defense system is said to be capable of neutralizing both conventional aerial targets such as aircraft and drones, as well as high-speed ballistic missiles. It was unveiled in a ceremony which was held on August 22 to mark the National Defense Industry Day in the presence of President Hassan Rouhani, Defense Minister Brigadier General Ami Hatami, a host of other Iranian high-ranking military officials and also military attachés of some other countries.

Bavar-373 is a mobile missile defense system designed to intercept and destroy incoming hostile targets flying at altitudes of up to 65 kilometers. The system employs missiles that have a maximum range of 300 kilometers. The long-range defense system is capable of detecting up to 300 targets simultaneously and engages six targets at a time.