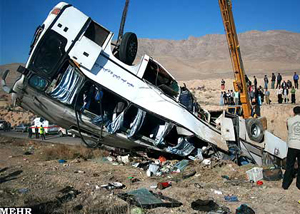 Hamelmann made the remarks on the sidelines of the 24th International Conference on Safe Communities held in Tabriz on August 22-25.

One of key areas being discussed in the conference is traffic injury prevention.

Besides, the Decade of Action for Road Safety 2011–2020 was officially proclaimed by the United Nations General Assembly in March 2010. It is estimated that 5 million lives could be saved on the world’s roads during the decade.

Traffic injuries account for a main percentage of injuries and accidents which vary between 50-64 percent in difference countries like Iran. Traffic injuries have been considered crucial problems and the economic burden in countries, so the goal of stabilizing and reducing road traffic deaths was introduced.

Road accident injuries are among the five major causes of deaths in Iran that has been increasing since 2017, however, it can be reduced providing a successful model for road safety in the Eastern Mediterranean region to the WHO, Hamelmann noted.

He went on to say that the road safety special working group, led by the road safety commission secretariat and Road Maintenance and Transportation Organization, the emergency services organization, WHO, and Traffic Police, provided the speed limitation and road support plan to improve road safety and speed management in the country.

The integrated trauma registration system with a focus on road casualties will be launched as a joint project with Tabriz University of Medical Sciences, the Ministry of Health, other key related organizations, and the WHO, he explained.

He further expressed readiness for cooperation to prepare the national road safety program for the next decade by strengthening fields of result-based management approach, advocacy, collaboration, fund rising, monitoring and evaluation.

Iran can count on full support of the WHO for reducing road fatalities, he concluded.

On the other words, traffic-related accidents are responsible for the death of some 15,000 people annually in Iran, he added.

According to statistics, 250,000 people get injured in road crashes annually, and if only 10 percent of them end up with disabilities, then 25,000 people are disabled per year, he lamented.

Responsible bodies must join hands to take steps toward reducing the accidents nationwide, he concluded.