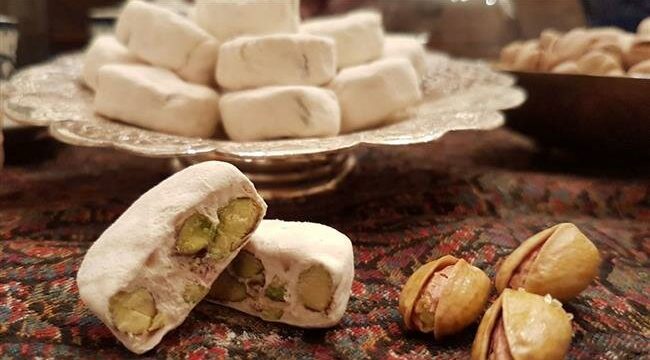 Press TV – Producers of Gaz, a famous candy from Iran’s cultural capital of Isfahan, are recouping losses at a rapid pace thanks to a steep fall in the price of pistachio.

A Thursday report by the IRIB showed that Gaz shops in Isfahan, where over 90 percent of the nougat is produced, were being frequented by customers after more than two years of recession in the industry.

It said retail price for Gaz had decreased by more than 10 percent compared to the last summer, helping sales inside Iran and reviving exports.

A main reason, said the report, was a steep fall in the price of pistachio, a main ingredient of Gaz. Producers believe the price of the red-green kernel could drop to one million rials per kilogram (above eight US dollars) with better harvest expected this year.

That comes as pistachio prices rose to 20 US dollars for each kilogram last summer.

Gaz is as the most popular souvenir item from Isfahan where some 24,000 people are employed in 380 factories and over 1,200 shops selling the product.

Estimates about exports of the candy have varied between 500 to 3,000 tons each year with an income of about $50 million.

The candy has almost 400 years of heritage to itself and reminiscent of the kings who ruled the Safavid empire from Isfahan.

It is mainly popular because it contains abundant amounts of pistachio, a nut for which Iran earns over a billion US dollars in exports each year.

Pistachio prices surged over the past years mainly because of poor harvests in Kerman, an arid region southeast of Iran where nearly 300,000 tons of the nibble is produced each year.