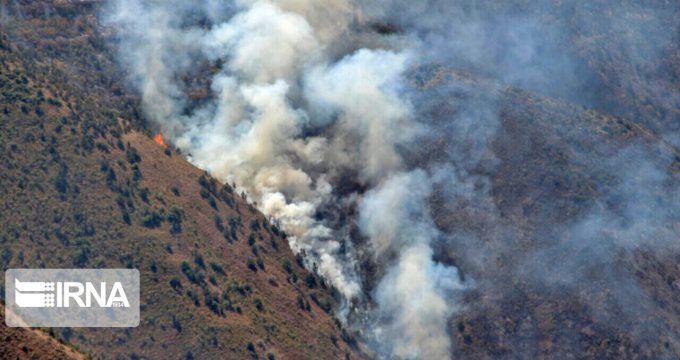 Fire in the forest of Arasbaran is nothing new; since the beginning of the current Iranian year the forest caught fire 24 times.

But the latest fire was unprecedented; it started on the deep steep slopes and shoulders of mountains.

Crisis Management Office of Eat Azerbaijan province, fire stations, the Red Crescent, the Police and the armed forces worked together to contain and put out the fire.

The height of the region and the wind made it hard to extinguish the fire.

A provincial official, Mohammad-Reza Honarbar, said on Thursday morning that the fire has been contained in all three points. But later, on Thursday afternoon, he announced that the fire re-started from the little flames under the ashes.

Army helicopters were also sent to the area for help the firefighters.

Early findings indicate that the fire had started due to human error. The fire burned to ashes 300 hectares of Arasbaran forest that is the habitat for 20% of the known plants in Iran.

The forest is 164,000 hectares and among the most intact ones in Iran. The files of the forest have been sent to UNESCO to be internationally registered.