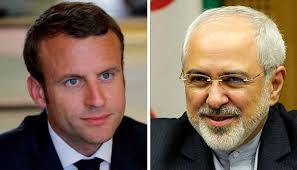 The meeting between the Iranian foreign minister and the French president is still underway in Élysée Palace.

According to media reports, the European countries’s commitments under the Iran nuclear deal or the Joint Comprehensive Plan of Actions (JCPOA) is the core issue being discussed in Zarif-Macron meeting.

The top Iranian diplomat is scheduled to meet with his French counterpart Jean-Yves Le Drian later today after the meeting with President Macron.

Emmanuel Macron, Iran-France talks, Zarif visit to France August 23, 2019
In a report to Congress, US Dep. of State acknowledges Iran’s compliance with NPT
FM Zarif to visit China on Sun.