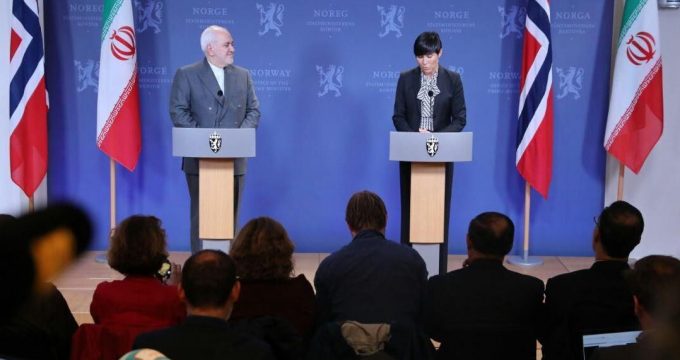 Zarif says will leave for Paris to examine Macron’s proposal

In a news conference with his counterpart Ine Eriksen Soreide on Thursday, he added, “We have some common grounds but they should be increased.”

“We are experiencing a challenging era, but we should know that the new world cannot be run with unilateralism and we should respect international rules and nations,” he said.

Navigation freedom is one of Iran’s basic policies and all should remain committed to it, Zarif said, adding that it is impossible to allow navigation in Strait of Hormuz but no in Gibraltar.

“A piracy occurred to our ship, but it has violated no rule,” Zarif complained.

Describing Iran as the major pivot of regional navigation, he said that increasing military forces in the region will make no help for regional security.

Elsewhere in his remarks, Iran’s top diplomat said that all parties to JCPOA should remain comply with the deal.

“Respect for the law of multilateralism is our main concern,” he said.