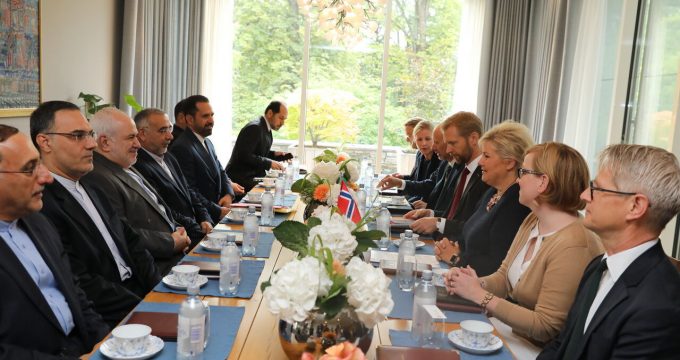 Norway is the third leg of Zarif’s European tour.

The Iranian foreign minister arrived in Oslo late on Wednesday.

On Thursday afternoon, Zarif will depart for Paris, France, to meet with President Macron.

Zarif at the head of an Iranian delegation left Tehran for Helsinki, Finland, on Sunday (August 18.)

The next day, he traveled to Sweden, held talks with top Swedish officials and delivered a speech to Iranians residing in that country.

Zarif’s talks in Sweden focused on the issues of mutual interests, the July 2015 nuclear deal- Joint Comprehensive Plan of Action (JCPOA)- Instrument In Support Of Trade Exchanges (INSTEX) and security in the Persian Gulf region, also in Yemen and Afghanistan.

Few days ago, spokesman for the Iranian Foreign Ministry Abbas Mousavi said the visit of the Iranian Zarif to the north European country of Finland which is part of his Scandinavian tour proves hollowness of the US baseless sanctions on him.