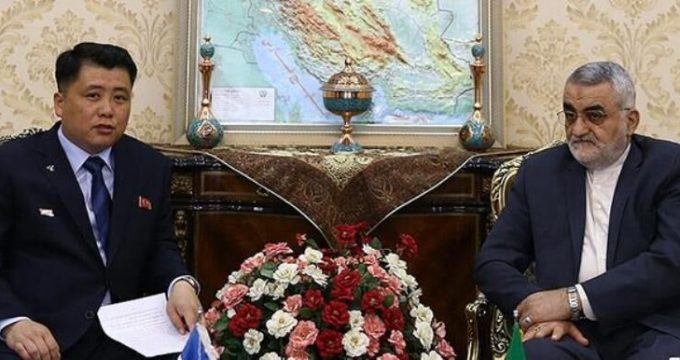 IRNA – Deputy Head of Democratic People’s Republic of Korean Supreme People’s Assembly Park Chul-min said on Tuesday that US sanctions on Iran and DPRP are failed policies, and that in years of sanctions, Tehran and Pyongyang achieved numerous successes on industrial, agricultural, defense and military domains.

He made the remarks in a meeting with Head of Iran-DPRK Parliamentary Friendship Group Alaeddin Boroujerdi.

The DPRK official said that promoting political, economic and cultural exchanges with Iran is one of the principled policies of his country, adding that DPRK parliament places a special emphasis on removing the obstacles in the way of mutual cooperation and easing interactions.

Referring to his county’s policy of promoting defense capability and the deterrence, he said, “DPRK has always been seeking to establish peace and stability in various regions across the world, especially Korean Peninsula.”

Borouerdi, for his part, hailed growing trend of bilateral relations, saying that Iran and North Korea boast of numerous capabilities which can be used in line with enhancing political, economic and military cooperation.

“Iran’s parliament welcomes any move in line with boosting bilateral ties in different spheres,” he said.

Describing the US as the cause of crisis in different areas of the world including Middle East and Korean Peninsula, he said that noncompliance with international accords such as the Joint Comprehensive Plan of Action indicates that the US is unreliable.

“Iran’s policy is to establish peace and security in the region,” he said, noting that promoting trade and economic cooperation between the two countries are regarded as way-out to thwart the US sanctions against Iran and North Korea.

Boroujerdi stressed the need for continued consultations between the two countries’ high-ranking officials.

During the meeting, the officials signed a memorandum of understanding (MoU) on cooperation between Majlis and Supreme People’s Assembly.

Based on the agreement, both sides agreed to promote cooperation in various fields including health, education, energy and agriculture.