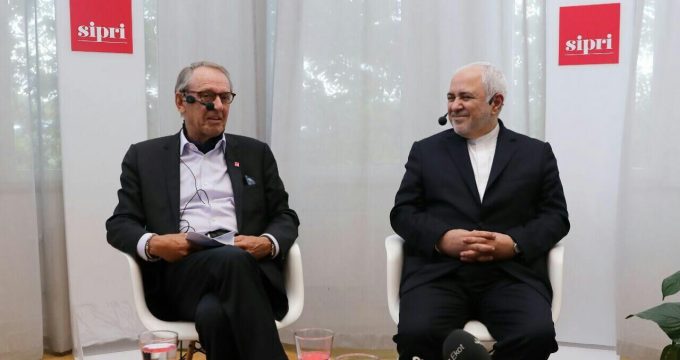 FM Zarif says there is nothing left untold in JCPOA

IRNA – Iran acted on what it had accepted, but it seems that the other side is trying to dictate to Tehran the issues that are clearly stated in the context of the Joint Comprehensive Plan of Action (JCPOA), and there is nothing left untold in the deal, Iranian Foreign Minister Mohammad Javad Zarif stated in Stockholm International Peace Research Institute (SIPRI).

Speaking at the Stockholm International Peace Research Institute on Wednesday, Zarif stated that in the current situation, humanity is the main issue in the international law. “International law should be for everyone and nobody should be an exception to it.”

Today, security developments in Afghanistan and Syria are affecting Europe and the whole world. This is a sign of the importance of insecurity in the various fields, and it shows that multilateralism is not a choice, but a necessity, the high-ranking official added.

Zarif pointed out that achieving security in the world alone is not enough, but it requires the cooperation of all countries in the world.

It seems like there has been a revolution in America in 2016, because they are not committed to respecting international law, and someone like John Bolton is using human rights as a tool of pressure against others, the Iranian foreign minister underlined.

When a country wants to stay safe at the expense of others’ insecurity, it faces unpleasant surprises, including when the US fails to provide its citizens with enormous military funding, he said.

Zarif pointed to Iran’s commitment to the JCPOA and made the remark that Iran has done what it agreed to, but it seems that the other side is trying to dictate to it the issues while in the JCPOA context it is explicitly stated. “And there is nothing untold in the agreement.”

The foreign minister reiterated that since the US left the country, the Europeans have not yet fulfilled their obligations while Iran remains committed.

Zarif said that “we were facing a government” that had violated its commitments. “We had resolution 598” about 30 years ago. On regional issues, a meeting of the Security Council was held and a resolution was issued, and on the basis of an agreement, Iran has fulfilled all its obligations.

In another part of his remarks, Zarif said that the next Iranian ambassador to Finland will be a woman.

The senior official, meantime referred to the seizure of the Iranian oil tanker that was seized by the government of Gibraltar and the European sanctions are not trans-boundary.

The United States is pursuing economic terrorism against the Iranian nation, and international law must be respected by all nations, he said.

Zarif went on to refer to Europe’s JCOPA-based commitments, saying that Europe has made 11 commitments, including in the area of ​​Iran’s oil purchases, investment in Iran and financial and banking exchanges.

Europe has pledged to normalize trade relations with Iran and Tehran has called on Europe to fulfill its obligations, the Iranian foreign minister said while addressing Europe.

Responding to a question about the interest in a new deal with Trump, the head of Iranian diplomacy highlighted that the nuclear deal has been achieved with open eyes. Tehran anticipated that because agreement would be violated by one of the parties, a mechanism was framed in the context of the JCPOA. “We have been negotiating with the US” for many hours. “We did not go out of the JCPOA” and have acted within the deal.

Referring to the third step in reducing JCPOA’s commitments, Zarif noted that the third step will definitely be stronger than previous steps. “We have announced our options to Europe.”

Responding to a question about the seizure of the Iranian oil tanker and the oil tanker Stena Impero, he stated that Iran ship in Gibraltar had not taken any illegal action but the British oil tanker had violated international rules. Iran has the humanitarian view of the crew of the Stena Impero tanker.

Ian Eliasson, Chair of the SIPRI Governing Board, also emphasized the importance of the JCPOA and went on to say that this agreement needs to be maintained and he has traveled to Iran twice. He expressed regret for the failure of Europe to fulfill its obligations and believes that INSTEX should be operational as a solution to this issue.

There is a big problem about the danger of war in the region and certainly a regional agreement can be effective in this area.

“We must try to prevent such crises from happening elsewhere in the world and not let the region go into a new crisis,” Eliasson said.

He stressed that in today’s world, victory is not achieved through military action.