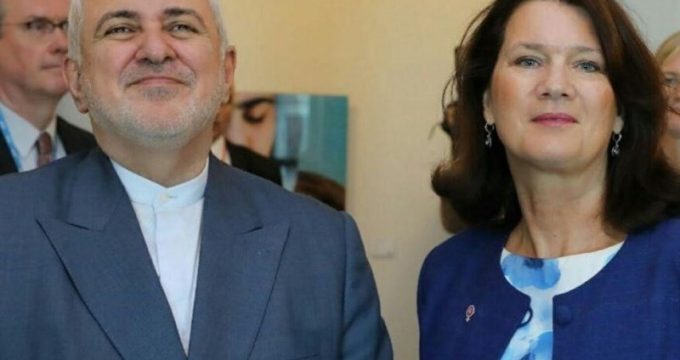 Tasnim – Iranian Foreign Minister Mohammad Javad Zarif, who is on a tour of Scandinavia, held talks with Swedish Trade Minister Ann Linde on a host of issues, including ways to boost economic ties between the two countries.

During the meeting held in Stockholm on Tuesday, Zarif and Linde, who heads Sweden-Iran Joint Economic Commission, exchanged views about the latest efforts to boost bilateral trade between the two countries.

Zarif started his tour of Scandinavia on Sunday night, which has taken him to Finland and Sweden. He is going to visit Norway on Thursday.

During his visit to Finland, Zarif met with President Sauli Niinisto and his Finnish counterpart, Pekka Haavisto. The two sides discussed the 2015 nuclear deal known as Joint Comprehensive Plan of Action (JCPOA), maritime security in the Persian Gulf, and also issues related to human rights.

He also met with Finnish Minister for Development Cooperation and Trade Ville Skinnari during his stay in the country.

Zarif left Finland on Monday for Sweden on the second leg of a three-nation tour of Scandinavia.

The top Iranian diplomat had visited Kuwait before heading to Scandinavia.