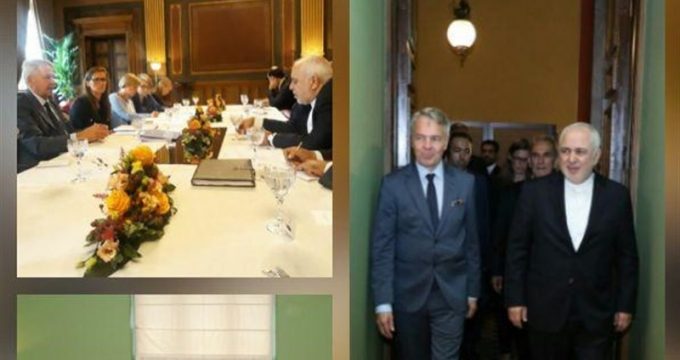 Finland supports INSTEX in defiance of US

Tasnim – Finnish Foreign Minister Pekka Haavisto voiced his country’s support for INSTEX, a financial mechanism that the European Union has developed to maintain trade with Iran and bypass the US sanctions.

Haavisto and his Iranian counterpart Mohammad Javad Zarif met in Helsinki on Monday to discuss various issues, including Iran-Finland bilateral ties and regional and international developments.

In the meeting, the Finnish minister said his country supports INSTEX (Instrument in Support of Trade Exchanges) –the payment channel that France, Germany and Britain have proposed to continue trade with Tehran and bypass the US embargoes– in spite of the US pressure on European companies.

The two diplomats also talked about the latest developments relating to Iranian supertanker Adrian Darya, formerly known as Grace-1, which has been released by the government of Gibraltar more than a month after it had been captured by the British Royal Navy on suspicion of attempting to breach global sanctions against Syria.

Haavisto and Zarif further discussed the latest status of the Joint Comprehensive Plan of Action (JCPOA), highlighted the necessity to expedite the implementation of INSTEX, and discussed the Persian Gulf security as well as Iran’s initiatives for regional dialogue.

Stressing the need for a “cognitive evolution” in the region, Zarif said Iran, which has the longest coastline among the countries bordering the Persian Gulf, is ready to ensure the security of the region.

Before meeting his Finnish counterpart, the Iranian foreign minister met with President of Finland Sauli Niinisto.

Speaking to reporters upon his arrival in Helsinki on Sunday night, Zarif said regional issues would be a main topic of discussions in his tour of Scandinavia.

“Finland has also had a plan for Persian Gulf dialogue, which is almost similar to a plan proposed by Iran,” the Iranian foreign minister added.

“A few years ago, I visited Helsinki, and proposed the plan for a regional dialogue forum in the Persian Gulf. The Finnish have been always interested in such subjects,” Zarif stated.

Highlighting the necessity for “extensive consultations” to address the “special conditions” that the region is currently facing, Zarif said he will be visiting Norway and Sweden, and will take a tour of Asia afterwards.

It is imperative to make arrangements ahead of the United Nations General Assembly, considering the special current situation, Zarif added.