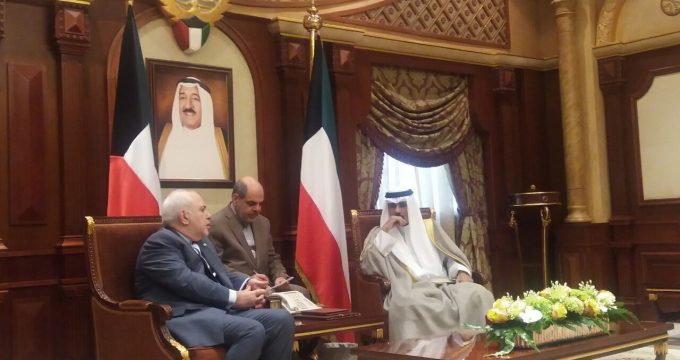 Zarif: Foreigners will be forced to leave region

IRNA – Iranian Foreign Minister Mohammad Javad Zarif said Iran will stay in the region but foreigners will be surely made leave it.

Speaking in a meeting with the Crown Prince of Kuwait Nawaf Al-Ahmad Al-Jaber Al-Sabah, Zarif wished immediate recovery for Emir of Kuwait and described him as a wise leader in the region.

He also termed Iran-Kuwait ties as friendly and brotherly and called for developing relations.

Referring to the importance of cooperation between regional countries and thanks to current developments, Zarif said Iran and Kuwait will stay in the region and the foreigners will not be here to stay.

Meanwhile, Nawaf Al-Ahmad stressed the regional interests, saying we are ready for establishing cooperation and negotiations since it will benefit the security and stability of the region.

Zarif arrived in Kuwait on Saturday to hold talks with his counterpart and other senior authorities of the Persian Gulf country.

Old and friendly relations between Iran and Kuwait, regional issues such as Palestine, the necessity to cooperate in the Persian Gulf, current regional affairs, the US economic terrorism against the Iranian nation were among the main topics that were discussed between Iranian FM Zarif and Iran-Kuwait Friendship group in Kuwait City on Saturday.