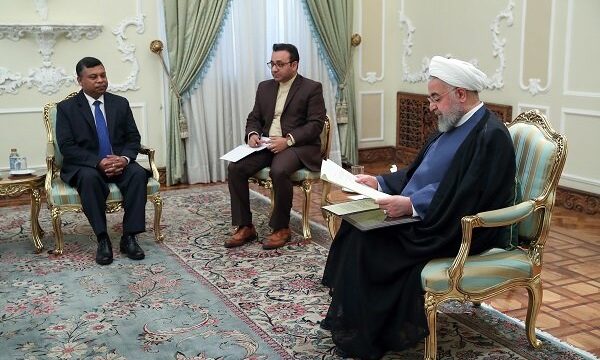 MNA – The Iranian president Sun. stated that relations between Iran and Bangladesh have always been friendly and expressed hope that these relations further deepen in bilateral and international fields.

According to the news service of the Iranian Presidency, President Rouhani made the remarks in a meeting with the new Ambassador of Bangladesh to Tehran while receiving his letter of credence on Sunday. Rouhani said during the meeting that “Tehran and Dhaka have many common cultural points and we are ready to develop our economic, political and cultural relations.”

He also appreciated the Bangladeshi nation and government for hosting Rohingya Muslims and expressed Iran’s willingness to help the refugees.

After presenting his letter of credence to Rouhani, the new Ambassador of Bangladesh to Tehran AFM Gousal Azam Sarker said “my mission is deepening relations between the two countries.”

“The two countries’ cooperation has been based on long-standing relations and close cultural roots and stances in international stages,” he said.

During the meeting, the ambassador also invited the Iranian president to attend the coming D8 Summit on behalf of his country’s high-ranking officials.