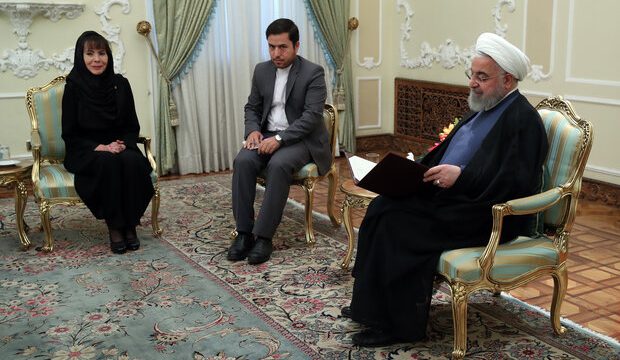 Iran willing to cement ties with Bolivia in all fields: Pres. Rouhani

MNA – President Hassan Rouhani underlined the need for the development of relations between Iran and Bolivia in all fields of mutual interest.

In a meeting with the new Ambassador of Bolivia to Tehran Romina Guadalupe Perez Ramos on Sunday, Rouhani expressed hope that the economic, political and cultural relations between the two countries further deepen during the term of the new Bolivian Ambassador.

He added that “the Bolivians are a revolutionary nation who have always attempted to keep their independence.”

“Our region and Latin America have long been facing issues, which we consider as having one root cause, and that is the interference and abuse by major powers,” he added.

Rouhani said, “We deeply believe that any nation that stands up for its interests against aggressors will win, and history is a witness to this fact.”

Regarding the two countries’ strategic and common goals at international communities, he said, “The two countries have always been alongside each other for realizing their goals and will continue to do so.”

The Bolivian Ambassador, who presented her letter of credence to Rouhani during the meeting, said, “Iran and Bolivia have many common points with each other.”

She also delivered the greetings of President Evo Morales to Rouhani and said, “Tehran and La Paz both oppose to the United States’ unilateral policies and arms race in the region, and we support each other’s independence and democracy.”