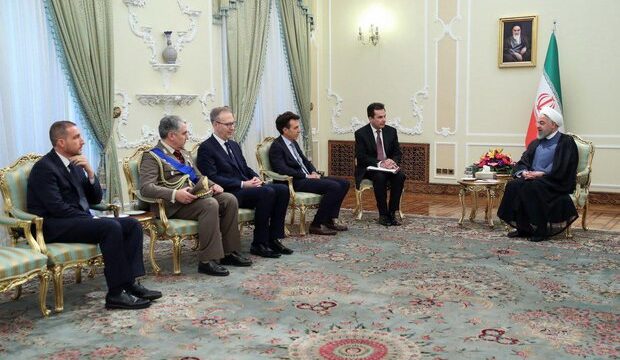 He made the remarks Sunday in a meeting with the newly-appointed Italian ambassador to Tehran, Giuseppe Perrone, who came to hand over his credentials.

“We are determined to maintain friendly ties between Iran and Italy,” said Rouhani, adding that unilateral and illegal sanctions of the United States should not affect these relations.

Rouhani also referred to economic relations and continued, “the current conditions are temporary, and the efforts of the two governments and how they treat these conditions will remain in both nation’s memory.”

“In the current conditions, we need to take advantage of initiatives to promote the cooperation and increase investment for stronger relations, which will be beneficial to both nations and the region,” said Rouhani according to President’s Office website.

The President went on to refer to Italy’s constructive role in nuclear negotiations, adding, “after the nuclear deal, very constructive and positive economic relations were established between the two countries, which needs to be continued relying on the political will of both governments.”

For his part, the new Ambassador of Italy to Tehran Giuseppe Perrone presented his letter of credence and said, “Rome is willing to deepen ties with Tehran in all fields of mutual interest.”

“We believe that the current conditions are transitory and the relations between the two countries must keep growing and developing,” he added.