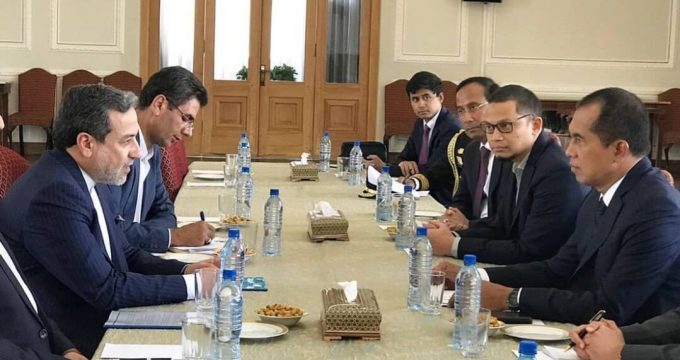 Araghchi welcomed boosting bilateral relations, saying that Iran’s defense capabilities build-up is just for deterrence and is not against any country.

“In contemporary era, Iran never started a conflict and will never do so, but, it will never hesitate to defend itself and will give crushing response to any aggressor,” he said.

Commenting on Iran’s peaceful nuclear program and US baseless allegations, he added, “As per a Fatwa by Supreme Leader, we consider any use of weapons of mass destruction forbidden in Islam.

He said that Iran has developed civilian nuclear program with indigenous technology.

Condemning US oppressive sanctions against the Iranian nation, Araghchi said that the sanctions are illegal and amounted to crimes against humanity.

He said that Iran is determined to turn the US threats to an opportunity by alternative strategy to make national economy independent of the oil revenues .

Almasyhari, for his part, hailed Iran’s self-confidence and independence, calling for the enhanced parliamentary relations between the two countries.

He also voiced his country’s readiness for cooperation in all fields including fighting extremism and terrorism.