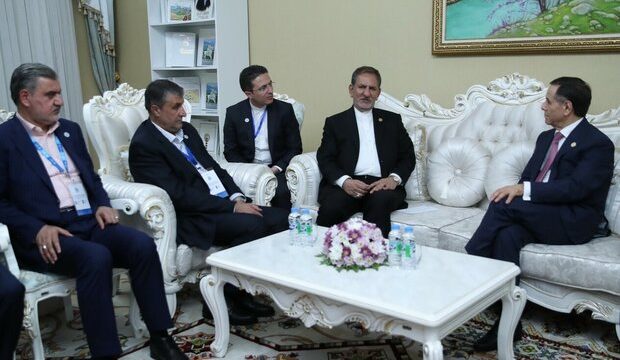 In the meeting, which took place on the sidelines of the first Caspian Economic Forum underway in Turkmenistan’s Awaza on Monday, Jahangiri stressed the role that the North-South Corridor can play in the development of relations among the countries of the region.

The vice president also emphasized Iran and Azerbaijan’s bilateral cooperation within the framework of trilateral and multilateral formats with the participation of Turkey, Russia, Turkmenistan and Georgia as a way to boost the two countries’ trade volume.

At the meeting, the Azeri prime minister described the expansion of economic cooperation with Iran as the demand of the government and the people of his country.

The Azeri PM further called for Tehran’s cooperation in various industrial, health and engineering fields with his country.

Furthermore, the first Iranian vice president held separate a meeting with Turkmen President Gurbanguly Berdymukhammedov on the sidelines of the same event in Awaza, during which he called for developing banking ties between the two sides.

He also expressed his gratitude to Turkmenistan for hosting the first Caspian Economic Forum, describing the event as a step towards the expansion of bilateral and multilateral economic cooperation.

Es'haq Jahangiri, Iran-Azerbaijan relations, Novruz Mammadov August 13, 2019
All potentials of Caspian Sea littoral states should be used in interest of all
Iran begins construction of research center on isotope separation