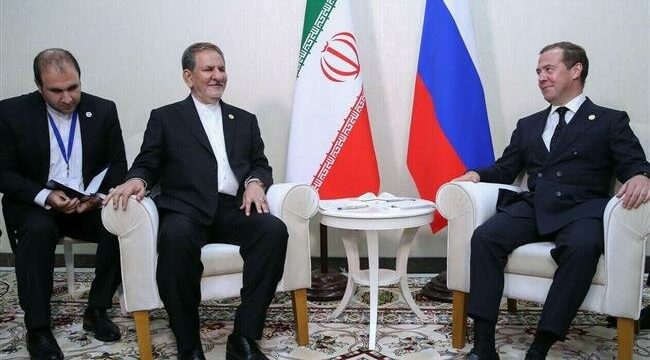 Press TV – Iran’s First Vice President Es’haq Jahangiri says the United States seeks to sow insecurity in the Persian Gulf and the strategic Strait of Hormuz to use it as an excuse for military buildup in this region.

Jahangiri made the remarks in a Monday meeting with Russian Prime Minister Dmitri Medvedev in Turkmenistan’s coastal city of Awaza, where the Iranian official is taking part in the first Caspian Sea Economic Forum.

The United States has been trying to persuade its allies to form an international coalition with the declared aim of providing “security” for merchant shipping in the Strait of Hormuz — through which about a fifth of all oil consumed globally pass —and other strategic Middle Eastern shipping lanes.

The US had officially asked Germany to participate — alongside Britain and France — in the coalition, a request that was declined by German Foreign Minister Heiko Maas. The UK, however, accepted to join the US-led coalition.

Japan has likewise refused to join the force, and France has expressed reservations.

Iran’s first vice president said, Tehran views recent “US measures in the Persian Gulf and the Sea of Oman disrupt security and stability in the region,” emphasizing, “We expect major member states of the UN security Council, like Russia, to warn the US about such actions.”

During his meeting with Medvedev, Jahangiri also lashed out at the US for unilaterally pulling out of a multilateral 2015 nuclear deal, officially called the Joint Comprehensive Plan of Action (JCPOA), and reinstating its harsh economic sanctions against Iran.

“The United States illegally withdrew from the multilateral agreement in spite of the fact that the International Atomic Energy Agency had in for 14 reports verified Iran’s full compliance with its commitments under the JCPOA,” Jahangiri said.

Stating that all the remaining signatories to the landmark accord should stay committed to their obligations, the official said, “Iran scaled back some of its commitments [under the nuclear deal] one year after the US pulled out of the JCPOA and reimposed brutal and inhumane sanctions against the Iranian nation.”

Elsewhere in his remarks, Iran’s first vice president underlined the need for the expansion of bilateral ties and cooperation between Tehran and Moscow, reaffirming that Iran is poised to boost cooperation with Russia in all fields, including energy.

The Russian premier, for his part, said Moscow’s policy regarding the JCPOA was “consistent” and “unchanging,” stating that Iran’s stance on Washington’s unilateral withdrawal from the nuclear agreement was “logical” and “strong.”

“The US pullout from the JCPOA was a baseless measure and all world countries realize this,” Medvedev said.

Stressing that Russia’s stance and policy concerning the JCPOA is similar to that of Iran, Medvedev said, “Russian officials … acknowledge this point and view [US] sanctions against Tehran as illegal.”