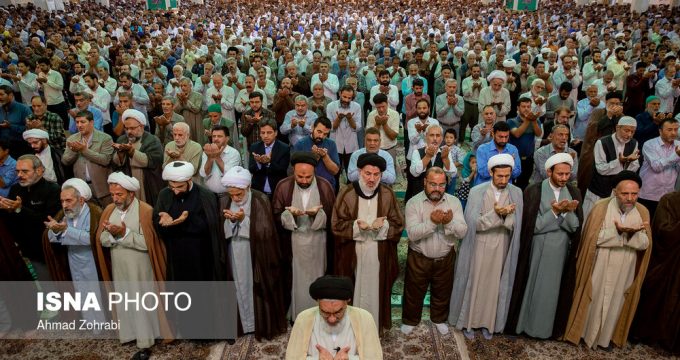 Tasnim | Erfan Khoshkhoo, Maoud Mohaqeq, Azam Dadashi, Maryam Ebrahimeh and Ahmad Zahrabi: Millions of Iranian Muslims including the state and military officials and people from all walks of life performed Eid al-Adha Prayer across the country. Iranian worshippers chant slogans urging unity of Islamic World. Eid al-Adha also called the ‘Festival of Sacrifice’, is the second of two Islamic holidays celebrated worldwide each year (the other being Eid al-Fitr). It honors the willingness of Ibrahim (Abraham) to sacrifice his son as an act of obedience to God’s command. Before Abraham could sacrifice his son, God provided a lamb to sacrifice instead. In the Islamic lunar calendar, Eid al-Adha falls on the 10th day of Dhu al-Hijjah.