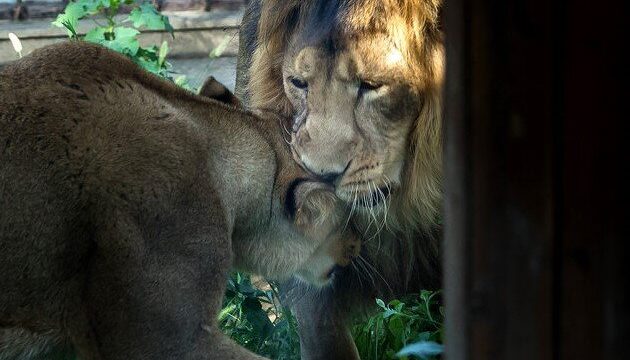 Persian lions at Tehran zoo introduced to live together

Tehran Times – The lion couple kept in captivity at Tehran Zoological Garden for reproduction of the endangered species have been introduced to each other to live together, a veterinarian at Tehran’s Eram Zoo has said.

A male Persian lion, born 6 years ago, was sent to Tehran Zoological Garden from Britain’s Bristol Zoo on May 1, under a population management program aiming at endangered species reproduction by the European Association of Zoos and Aquaria (EAZA).

A female lion of the same subspecies from Ireland also sent to Iran to accompany the male lion through the conservation program.

The female lion has so far met her male companion, but this time they are going to live in together after two months after being introduced to each other, Mehr quoted Iman Memarian as saying on Saturday.

Most animals recognize other animals by sight or smell, although other cues could be used, such as sounds. Odors are also used as cues to familiarity or genetic relatedness in mammals, birds, amphibians, fish and insects; odors mainly come from general sweat glands or from specialized glands in the skin, he explained.

“Some wild species even kill each other after being introduced; therefore, we are so cautious about the lion couple and are under supervision since next few days,” he added.
Referring to reproduction of Asiatic lion, he said that there is not a specific plan yet unless one is announced by European Endangered species Programme (EEP).

Currently, the two animals are controlled with contraceptives, he stated, adding, they undergo birth control measures as long as the purpose for their captive breeding is determined.

Over the past years, Tehran Zoological Garden has succeeded in becoming a member of EAZA, and it is being supervised to ensure the animal’s safety, he highlighted, adding, “We met the internationally defined standards.”

He went on to add that the male lion is the only Persian lion, as its twin sibling died due to severe respiratory problems.

Considering that Persian lion is a symbol in Iran’s wildlife, since past 80 years, many efforts have been taken to turn the valuable species back to the country which faced failure due to different reasons, he noted.

“As selling or buying animals in European zoos is banned, after 8 years of efforts, we could turn the couple back due to our compliance with the EAZA standards,” he said.

Disappeared for 80 years, Persian lion once prowled from the Middle East to India, while currently only a fraction of these magnificent animals survive in the wild, which range is restricted to the Gir National Park and environs in the Indian state of Gujarat.

On the International Union for Conservation of Nature (IUCN) Red List, it is listed under its former scientific name Panthera leo persica as Endangered because of its small population size and area of occupancy. It was also known as “Indian lion” and “Persian lion”.

Historical records in Iran indicate that it ranged from the Khuzestan Plain to the Fars in steppe vegetation and pistachio-almond woodlands. It was widespread in the country, but in the 1870s, it was sighted only on the western slopes of the Zagros Mountains, and in the forest regions south of Shiraz. Some of the country’s last lions were sighted in 1941 between

Shiraz and Jahrom in Fars province, and in 1942, a lion was spotted about 65 km northwest of Dezful. In 1944, the corpse of a lioness was found on the banks of Karun River in Khuzestan province.

Conflicts with humans, wildfires, poaching, canine distemper virus, decreases in population sizes of native ungulates are of the threats to the lions.