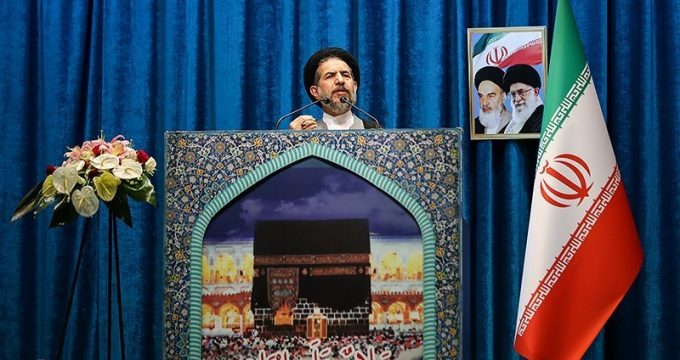 MNA – A senior Iranian cleric hailed the Islamic Revolutionary Guards Corps (IRGC) defensive might, saying the elite force has managed to destroy the United States’ fictitious and artificial grandeur in the world.

“The IRGC not only destroyed the US’ stealth drone but it also tarnished Washington’s fictitious grandeur in the world,” Ayatollah Seyed Mohammad Hasan Aboutorabifard said at Eid al-Adha prayers in Tehran on Wednesday morning.

He was referring to the downing of an advanced US spy drone by IRGC in June after the aircraft violated the Iranian airspace and ignored several warnings. The United States denied that the drone intruded into Iran’s airspace at the time.

Referring to Washington’s other regional and trans-regional allies, Ayatollah Aboutorabifard said, the Zionist regime, Al Saud and Al Khalifa in Bahrain are also on the brink of a dangerous situation and are definitely doomed to defeat.

Elsewhere in his remarks, the senior cleric felicitated the Muslims of the world on the auspicious festival of Eild al-Adha on the Islamic calendar that marks the climax of the annual hajj pilgrimage in Mecca and Medina.

He called on the Muslim Ummah to continue their path of resistance against the tyrants to overcome the enemy in each and every scenario.