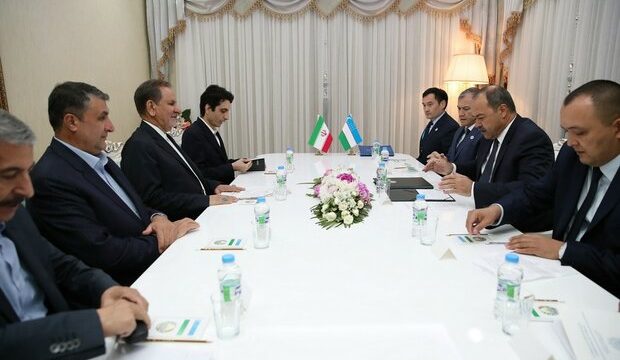 MNA – First Vice President Es’hagh Jahangiri said that Iran is ready to enhance cooperation with Uzbekistan in all fields of mutual interest.

He made the remarks in a Sunday meeting with Uzbek Prime Minister Abdulla Aripov on the sideline of 1st Caspian Economic Forum, underway in Turkmenbashy, Turkmenistan.

Jahangiri said that both countries should try to remove barriers to trade ties so that a comprehensive document of cooperation can be signed in the near future.

Pointing to potentials of cultural cooperation, he noted that the Islamic Republic enjoys great experiences in repairing and restoring historical sites and that it is ready to share this knowledge.

Jahangiri further highlighted the need to stop other countries from intervening in Iran-Uzbekistan ties, noting, “Iran and Uzbekistan are two key players in the region which share common interests and threats. Cooperation between the two countries in security areas can help regional stability.”

For his part, Abdulla Aripov said that the two countries should continue bilateral and multilateral cooperation to uproot extremism in the region.

Uzbekistan welcomes Iranian companies’ investment, he said, adding that level of bilateral cooperation and trade ties has improved in recent months, compared to the previous year, but there is still need to tap into full potentials of cooperation.

Issues related to the development of economic cooperation within the Caspian region will be considered in the framework of the Forum.