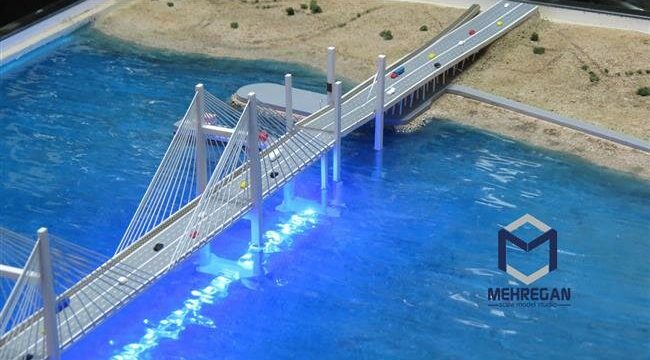 Press TV – Minister of Roads and Urban Development Mohammad Eslami says Iran plans to resume the construction of its longest cross-sea bridge, linking the Qeshm Island in the Persian Gulf to Bandar Abbas.

“Negotiations have been held with the investor of the Persian Gulf Bridge to see the construction resume,” Eslami told reporters on the sidelines of a ceremony on the Qeshm Island to unveil a homebuilt catamaran.

The minister said the construction of the bridge has been halted for various reasons, most notably due to “environmental considerations”.

Eslami described the Persian Gulf Bridge as the “symbol of advanced engineering”, saying it will contribute to the region’s economic boom, providing easy access to the Qeshm Free Zone and a transit corridor.

The transit corridor stretches all the way to the Caspian Sea and the Central Asia.

The Persian Gulf Bridge is made up of 2.4 kilometers of bridge and a two-lane causeway as well as a railroad section.

It is reportedly being built by an Iranian company at a cost of 450 million euros. Former secretary of Iran’s free trade zones Akbar Torkan had said in 2015 that the construction was being held up by Bank Sepah’s failure to provide finance.

Officials have said the project is vital to economic and industrial development of Qeshm which is Iran’s largest island.

The rail section has been planned to ship 7 million metric tonnes of iron ore a year to produce 3.5 million tonnes of steel on the island.

The idea to link Qeshm to Iran’s southern shores with a bridge dates back to 1972 but it didn’t realize until after the Islamic Revolution.

The project, however, was halted at the order of the former President Mahmoud Ahmadinejad who proposed to build a subsea tunnel instead of a bridge. That proposal was finally rejected because of high costs, much advanced technology and risks involved.

The Persian Gulf Bridge will connect Qeshm to the main transit corridor linking the Caspian port of Anzali to Bandar Abbas and Chabahar on the Gulf of Oman.

With the regional countries, notably the UAE investing in the Kazakh port of Aktau, officials say the Iranian transit corridor will play a strategic role in boosting regional trade.

Emirati delegations have visited Bandar Anzali, Qeshm and Chabahar in the past to assess trade capacities.

Iranian officials once said DP World, one of the largest port operators in the world, was weighing investments of up to $1 billion in Iran, but those plans are facing the headwinds of unilateral US sanctions.