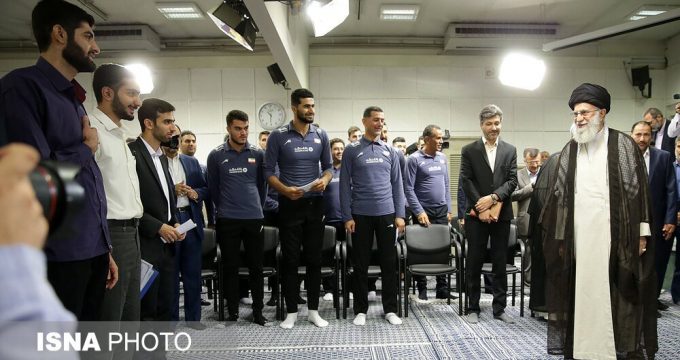 He made the remarks in a meeting with some 115 Iranian medalists of the national and international scientific Olympiads and Iran’s U21 Volleyball Team athletes who had become the world champion.

The Supreme Leader said that the path of self-promotion and the human capacities are endless, advising the young elites to proceed with learning.

“We have a lot to do; once we used to be on top of the World and little by little descended,” he said, adding that the fact is that in the past two centuries foreigners interfered with the Iranian affairs, something intolerable.”

Iran was left behind and other countries kept advancing; with all the activities and moves after the Islamic Revolution, Iran has not been able to move forward on the domain of science and technology, which is the job and duty of the elite, he said.

The Supreme Leader termed the meeting as “sweet” and that the young elite’s comments showed that they are accurate and learned well.

The Leader appreciated the elites for presenting the medals to him, saying that it is a “symbolic act” of giving their medals to him is actually giving them to a symbol of the Islamic Republic not an individual.

Accepting the gift, he said that he would return the medals to the elites themselves afterwards.

The Supreme Leader said that Iran is one the best countries in nanotechnology, adding that it is expected that the youth discover numerous scientific phenomena and continue to progress.

The Leader appreciated services of the young volleyball team for becoming champions of the world, saying that “you made the people happy”.

Referring to one the elite women present at the meeting, Ayatollah Khamenei said she is an example and proof that women can be very successful and have a spouse and kids at the same time.