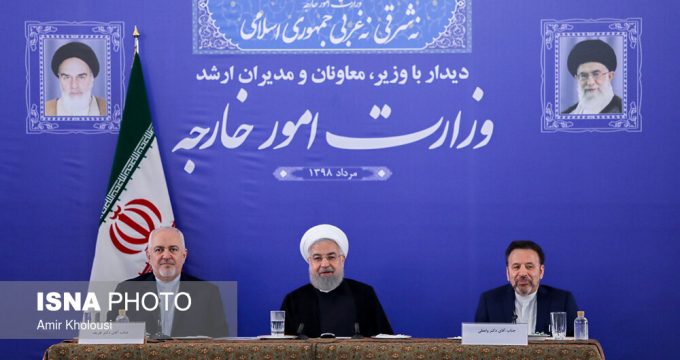 Rouhani said in a meeting with Zarif that Iranian foreign policy pertains to all Iranians; when speaking about Iran’s foreign affairs, he comments as the representative of the nation, not just a certain political group or wing.

Iranian people have seen the foreign policy of both before and after the Islamic Revolution, one of whose features is independence that was seen in the slogans of the people and now Iran is independent, Rouhani said.

Rouhani said that Iranians used to being ignored before the Revolution because they had to accept whatever the foreigners wanted.

He added that Iran is independent and has a say in the international community; Iran’s foreign minister talks on behalf of the people of Iran, not as a representative of the Western or the Eastern powers.

Rouhani said that representatives of many countries speak on behalf of certain superpowers not on part of their own people. they repeat the ideas of great powers in other words.

Not many countries have the honor of independence, President Rouhani said.

The president said that it is important that the officials of the Ministry of Foreign Affairs are experts and adept in their field of work.

He added many have studied politics and have experience too, but are no expert. “Iranian Foreign Minister Zarif is a “political pundit.”

All over the world, the governments make most important foreign policy decisions in the context of their own Constitution, he said.

Iran openly announces its idea; when the Islamic Republic of Iran reaches a decision, it announces it to the world, he said.

He said that Zarif bravely declares his ideas, even if it is opposite top what the president thinks. It is a good thing that many cannot see.