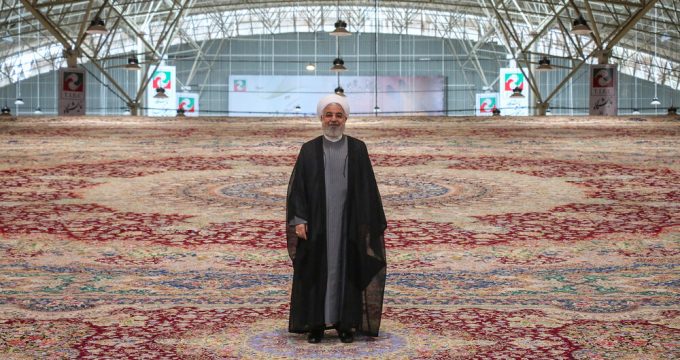 Tehran Times  – President Hassan Rouhani on Thursday unveiled a gigantic handwoven carpet during the opening ceremony of an international carpet fair, running in Tabriz from August 1 to 4.

Measuring 600 square meters, the carpet is said to be worth some $100 million, Tasnim reported.

Tabriz, which is capital of northwestern East Azarbaijan province, was named the world city of carpet by the World Crafts Council in 2015.

Tabriz carpets usually show a medallion decorative scheme, ranging from a single medallion to the complexity of a star centerpiece with pendants and cartouches, reflected by quarter-medallions similarly elaborated in the corners of the field. The ground pattern often features coiled arabesque vine work.

Over 5,397,000 tons of Iranian carpets, worth $424.451 million, were exported to over 70 countries with the U.S. standing on top of the importers list, during the past fiscal year (ended March 20, 2019). Germany, the UK, Italy, France, Spain, Switzerland, Austria, Russia, Portugal, Denmark, Sweden and Norway as well as Hungary, Romania, Poland and Ireland are major importers of Iranian carpet.

Persian carpets are sought after internationally for their delicate designs and good quality.