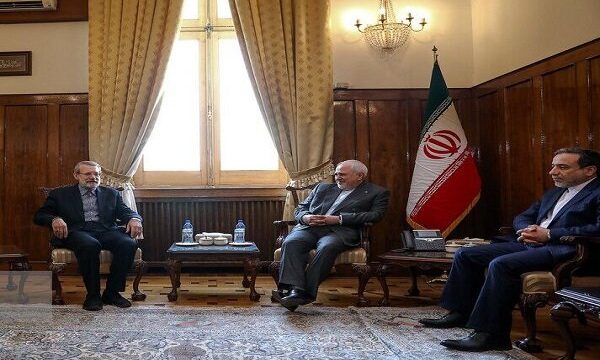 In this meeting, Parliament Speaker Larijani termed Iranian Foreign Minister Zarif as a symbol of hardworking and experience in the foreign diplomacy of the Islamic Republic of Iran in international arena.

He seized this opportunity to express his special thanks to the Iranian Foreign Minister Zarif and added, “you [Zarif] acted tirelessly and indefatigably in this field and brought about numerous achievements to the Islamic Revolution and the Establishment.”

Elsewhere in his remarks, Larijani described Zarif as an experienced, competent and skilled diplomat and added, “as chief official in charge of foreign policy of the country, you [Zarif] defend the country persistently, authoritatively and seriously. Since your efforts have been effective in the international arena, enemies of the country have resorted to impose sanctions on you.”

For his part, Iranian Foreign Minister Mohammad Javad Zarif expressed his thanks to the presence of Iranian Parliament Speaker Larijani in the Foreign Ministryand added, “we will strongly support the defend the national interests in the international arena.”

It should be noted that US Department of Treasury imposed sanctions on Iranian Foreign Minister Mohammad Javad Zarif last week.

The meeting was also attended by Deputy Foreign Minister for Parliament and Iranian Expatriates’ Affairs and Spokesman for the Foreign Ministry Seyyed Abbas Mousavi.