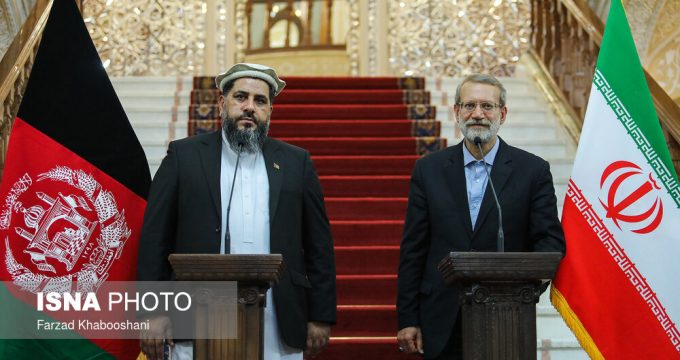 Larijani says Afghan govt. should be at center of peace efforts

MNA – Iranian parliament speaker says that Afghan government should be at the center of efforts for creating peace in Afghanistan.

Iranian Parliament Speaker Ali Larijani made the remarks in a joint press conference with the Chairman of the Afghan Senate House, Upper House of the Parliament, Fazal Hadi Muslimyar in Tehran on Saturday.

Larijani said that Iran has always tried to preserve Afghanistan’s integrity, independence and security, adding “today, the strategic policy of the Islamic Republic of Iran is that any move towards peace in Afghanistan must be organized with the Afghan government at the center.”

He noted that the Americans are not trustworthy in negotiations, something that could be seen in talks with Iran to reach the Iran nuclear deal.

Fazal Hadi Muslimyar, for his part, said in the joint press conference that the Islamic Republic of Iran has played a positive role in reducing the problems of Afghanistan, expressing his appreciation to Iran’s Leader for his insistence on peace in the neighboring country as a necessity.

The chairman of the Afghan Senate House further expressed his gratitude for the Islamic Republic’s support for the Afghan government, stressing that the two countries will continue their bilateral relations.