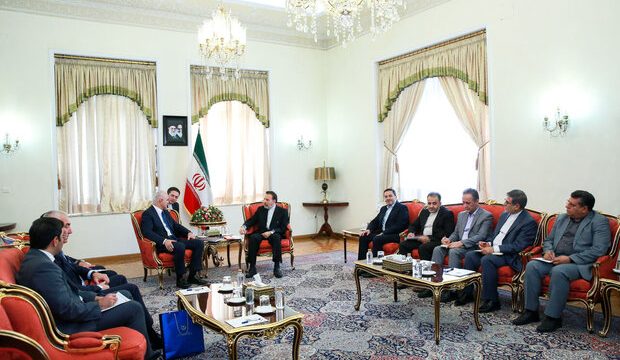 MNA – Chief of Staff of the Iranian President Mahmoud Vaezi and Azeri Economy Minister Shahin Mustafayev met in Baku on Saturday to discuss the ways of boosting collaboration in all areas of mutual interest.

During the meeting, Vaezi hailed the growing relations between the two countries in various political, economic and cultural fields, saying “Iran-Azerbaijan ties have developed further despite the US sanctions.”

The Iranian official expressed hope that the bilateral relations between Iran and Azerbaijan would further develop and highlighted the need for efforts to help promote the economic ties.

Connecting the two countries’ railways, linking their national electrical grids, developing customs cooperation as well as expanding trade, sport and tourism ties, are among the efforts made by Tehran and Baku to expand their relations, Vaezi noted.

He added that Tehran and Baku have also good cooperation in pharmaceutical, car manufacturing and joint investments, and share many common stances on regional and international issues.

Vaezi, who is in in Azerbaijan to provide the grounds for next week’s trilateral summit by Russia, Azerbaijan and Iran on Syria’s peace process, also thanked the Azeri officials for rescuing the crew of a sunken Iranian ship in the Caspian Sea.

Mustafayev, for his part, referred to the the growing number of Iranian companies in Azerbaijan over the past two years and stressed the need to raise the annual trade volume between the two countries.