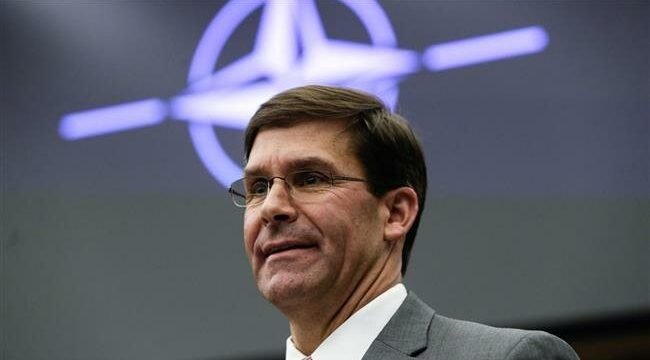 US looking to deploy intermediate-range missiles in Asia: Pentagon chief

Press TV – United States Defense Secretary Mark Esper says he is in favor of placing ground-launched, intermediate-range missiles in Asia, a day after the United States pulled itself from a Cold War era arms control pact.

In an interview on Saturday, the new Pentagon chief, however, did not specify where the United States intended to deploy the weapons.

“Yes, I would like to,” Esper told reporters traveling with him to Sydney when asked whether he would put such missiles in Asia.

“I would prefer [in] months, I just don’t have the latest state of play on timelines for either a cruise missile or long-range missile … but these things tend to take longer than you expect,” he added.

The announcement came after the US formally left the Intermediate-Range Nuclear Forces (INF) Treaty with Russia on Friday.

Washington had accused Moscow of violating the treaty. Russia repeatedly denied the allegation.

Secretary of State Mike Pompeo on Friday announced the US withdrawal from the Cold War-era treaty, blaming Russia for its “demise.”

NATO also blamed Russia for the collapse of the treaty and vowed to respond in a “measured and responsible way” to Moscow’s deployment of a cruise missile.

Shortly after the announcement, Esper said the US had already started work to develop “mobile, conventional, ground-launched cruise and ballistic missile systems.”

“The Department of Defense will fully pursue the development of these ground-launched conventional missiles as a prudent response to Russia’s actions.”

Esper went on to say that Washington would cooperate with its allies in “implementing the National Defense Strategy, protecting our national defense and building partner capacity.”

In February, Washington announced its decision to suspend compliance with the treaty. Russia in response suspended its compliance in March.

The treaty, which was concluded in 1987, required the US and Russia to eliminate their medium-range missiles to prevent them from launching a nuclear strike at short notice.

According to reports, Washington sees a benefit in developing new weapons as part of its new policy to confront both China and Russia.

Last month, Esper said abandoning the treaty would free up the US military “to deal with not just Russia, but China.”

Other US officials, however, have warned the decision would jeopardize the country’s future missile testing and research programs as the Democratic-controlled House of Representatives will not provide adequate funding.