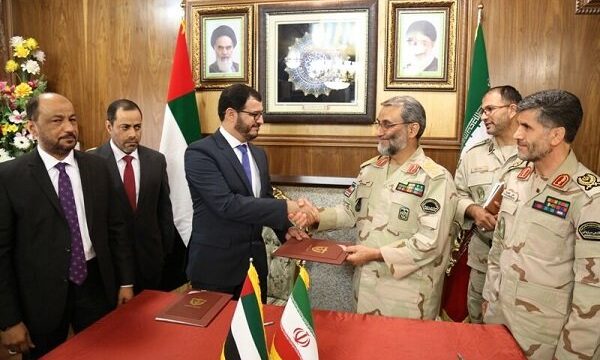 Commander of Iran’s Border Police Brigadier General Qassem Rezaei made the remarks in his meeting with the Commander of the Emirati Coastguard Brigadier General Mohammad Ali Mohammad Mosleh al-Ahbabi and added, “a practical meeting was held in this regard for promoting border cooperation between Islamic Republic of Iran and the United Arab Emirates.”

He pointed to the annual consecutive meetings between the two countries in Tehran and Abu Dhabi and said, “of course, these cooperation meetings are held every six months in one of border guard regions.”

Organizing such meetings, moreover enhancing interaction and strengthening border guards, will pave suitable ways for countering disruptors of peace and security of countries, he emphasized.

For his part, Commander of the Emirati Coastguard Brigadier General Mohammad Ali Mohammad Mosleh al-Ahbabi said, “signing and sealing border Memorandum of Understanding (MoU) is a giant and positive step for securing interests of the two countries, the issue of which will promote border security between the two countries, border control and facilitate transit activities, etc.”