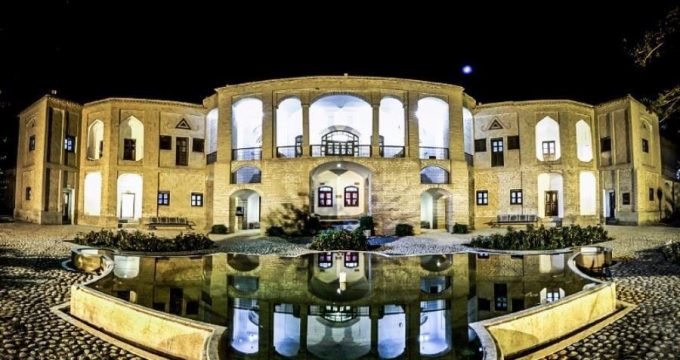 IRNA – Akbarieh Garden and Historic Mansion is a precious collection in the city of Birjand, South Khorasan province, registered as a world heritage and shines like emeralds in the desert.

Akbarieh Garden in Birjand, like other examples of The Persian Gardens, beautifully indicates the strong potentials of the environment and nature as well as how to use them the most.

All examples of the Persian Garden have three features in common, first they are located near a water current, second, they are walled with long walls and the last, they all have a summer resident and a pool in the middle.

Akbarieh Garden in Birjand which is one of them has all these three features in addition to the splendid surroundings. The garden was constructed in an eye-catching mountainous area and has two mansions inside. The oldest mansion dates back to the late Zandiyeh and early Qajar eras. The garden was used as the residence and the place for hosting the guest and doing the official works of the governors.

The main plan of the garden has a root in the Iranian art of architecture and is fantastic to visit. Magnificent sash windows, stunning plaster works and tall oak trees on the both sides of the entrance will amaze any visitor.

This complex includes several mansions, the oldest building is “Heshmat ol-Molk” Mansion which is located in the eastern end and has two floors. It dates back to the late Zandiyeh and early Qajar era. The garden is registered as a world heritage site by UNESCO in 2011 , also is registered in index of Iran national monuments in 1999.

Its decorations include a hall of mirrors, the main middle house a skull capped arched dome decorated with officially lined paintings etc. Bearing in mind that the building was first build and used as a Government house, the garden comes into the category of a governmental garden. At the present time, the traditional dining room and the valuable museum containing archaeological, anthropological and wildlife specimens are included in the complex.

The oldest mansion was built by Amir Alam Khan III Heshmat al-Molk, one of the Qajar governors of the Khorasan region, and is located in the eastern part of the complex. This two-story building has two large hallways that connect the main building to the southern garden and stables.

The Heshmat al-Molk structure has Muqarnas (ornamented vaulting) and Rasmi Bandi (interlocking patterns, arches and geometric shapes) decorations as well as a Hall of Mirrors.

The main Akbariyeh structure was built by Heshmat al-Molk’s son, Amir Mohammad Ebrahim Khan, Shokat al-Molk (1880-1943) in the western part of the complex. This two-story structure boasts Monabbat (wood carving and inlaid work), lattice, and stained glass decorations as well as arabesque and geometric stucco reliefs. This building was originally used as a place to receive and entertain guests but is currently the location of the Archeology and Anthropology Museums of Birjand.