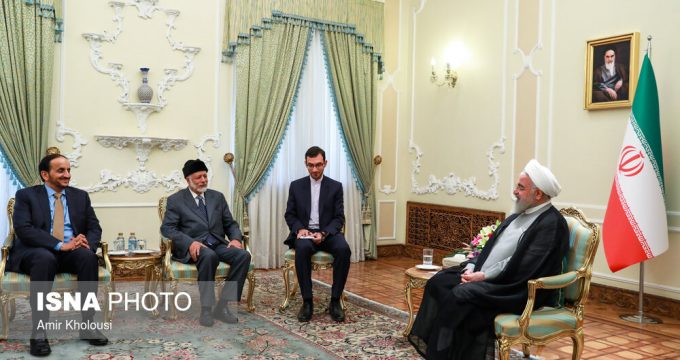 July 30, The Iran Project – On the second such visit in recent months, Omani Foreign Minister Yusef Bin Alawi took a trip to the capital Tehran on Saturday (July 27) for consultations with senior Iranian officials on bilateral issues and the latest developments of the region.

In a meeting, Iranian and Omani FMs discussed the relations between Tehran and Muscat, as well as controversial issues related to the region and the international community.

Referring to the meeting with his Omani counterpart, FM Zarif wrote in a tweet: “Discussed effects of the US’ #EconomicTerrorism on Iran; bilateral relations, regional developments & security in the Persian Gulf, the Strait of Hormuz and the Gulf of Oman.”

Last week, Oman’s Foreign Ministry had announced that the visit will be made as a part of the two Middle Eastern countries’ bilateral relations and the ongoing consultations between Tehran and Muscat while adding that regional developments will also be discussed.

In a Sunday meeting with the foreign minister of Oman, President Rouhani denounced the “illegal” move by the British government to seize Iranian oil tanker Grace 1 in Gibraltar’s waters, warning the UK government that it will definitely pay the price for the move.

The Iranian president underlined that the Islamic Republic of Iran will continue to stand vigorously against any violation of regulations that would threaten the security of shipping in the Persian Gulf, Strait of Hormuz, and Sea of Oman.

Presence of foreign forces in the region not only does not contribute to security, but is the root cause of regional tensions, he deplored.

The president also voiced Iran’s willingness to enhance cooperation with Oman in various fields, saying Tehran and Muscat can broaden ties in diverse areas such as the energy industry and bilateral trade.

or his part, Omani foreign minister hailed the brotherly and friendly ties between his country and Iran, saying the sultanate welcomes closer interaction with the Islamic Republic.

The region is riding out of fabricated and proxy crises, the Omani top diplomat said, stressing that sustainable and genuine security in the region would be impossible without Iran.

During a meeting with Bin Alawi, Ali Shamkhani said his country’s seizure of a British-flagged oil tanker in the Strait of Hormuz was totally lawful, adding that we believe that all countries need to respect international maritime law in order to help maintain security, and we make no exceptions for any country in this regard.

“Unlike Britain’s piracy in the Strait of Gibraltar, where it illegally confiscated an Iranian oil tanker, Iran’s measure [in the Persian Gulf] has been completely legal and in line with maritime regulations and security,” Shamkhani stated.

Shamkhani was referring to the UK-flagged Stena Impero tanker, which was impounded by Iran’s Islamic Revolution Guards Corps (IRGC) on July 19 when it was passing through the Strait of Hormuz en route to Saudi Arabia “for failing to respect international maritime rules.”

The Omani FM, in turn, said all countries must avoid measures that would add to instability and insecurity in the region.

In the meantime, the Iranian parliamentarian said Iran’s main strategy is to improve regional security.

Underlining Oman’s role as a positive one in the region and also in having JCPOA hammered, Ali Larijani lamented about the withdrawal of the US from the nuclear deal adding that during the past year Iran has acted with high patience while Europeans did not fulfill their obligations under the nuclear deal framework.

The Omani FM, for his part, referred to Iran-Oman cooperations in the past, saying “we are on the same track and have the same goal i.e. ensuring regional security.”

“We do believe that Iran acts reasonably and plays a significant role in ensuring the security of the region,” he said, adding that “unfortunately, some unreasonable leaders are ruling the world thus we should cement our cooperation.”

The goal of Omani FM visit to Iran, reportedly, was to convey the following two messages to Iranian officials:

First, UK has suggested that if Iran releases the detained British oil tanker, Stena Impero, the country will remove the seizure of Iranian oil tanker, Grace 1, in return.

Second, due to a suggestion made by Jared Kushner, the Senior Advisor to the President of US, Americans will unblock some of the Iranian frozen assets via Oman in case the Islamic Republic draws back from its stance towards the ‘Deal of Century’.