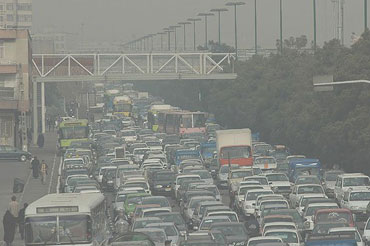 Tehran Times – Some 25 percent of vehicles which referred to technical inspection centers in Tehran to receive inspection stickers have failed the tests due to producing high level of emissions, managing director of Tehran Vehicle Inspection Company affiliated to Tehran Municipality has said.

Vehicle inspection is a procedure mandated by national or subnational governments in many countries, in which a vehicle is inspected to ensure that it conforms to regulations governing safety, emissions, or both. Inspection can be required at various times, e.g., periodically or on the transfer of title to a vehicle.

When a vehicle passes inspection, often a sticker (inspection decal or inspection sticker) is placed on the vehicle’s windshield or registration plate to simplify later controls.

“Some 114,000 cars have referred to the inspection centers during the Iranian calendar month of Tir (June 21- July 22),” ISNA quoted Navab Hosseini-Manesh as saying on Saturday.

There is no big difference between the number of car owners who referred to receive inspection stickers over the past month and those who referred at the same period last year, he added.

Pointing to the major defects causing cars to be rejected in the tests, he stated that 25 percent of the cars were polluting, 7 percent of their wheels were out of alignment, and some 9 percent had brake problems.

All the vehicles in Tehran are required to get inspection stickers indicating the level of emission they produce, since the low emission zone (LEZ) scheme went into effect in November 2018.
The first phase of the scheme started in Tehran on September 5, 2016.

Tehran City Council member, Arash Milani, has said that vehicle inspection can contribute to air pollution mitigation by 15 to 25 percent.

According to a report published by Tehran Air Quality Control Company, mandating vehicle inspection, has led to a 44 percent decline in black carbon emission.