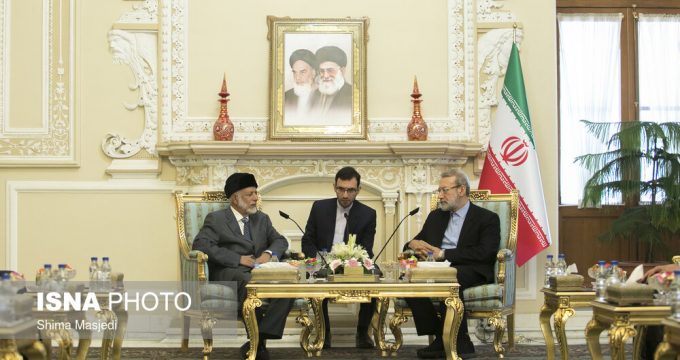 Underlining Oman’s role as a positive one in the region and also in having JCPOA hammered, Larijani lamented about the withdrawal of the US from the nuclear deal adding that during the past year Iran has acted with high patience while Europeans did not fulfill their obligations under the nuclear deal framework.

“Iran decided to take countermeasures [reducing its commitments] in accordance with the way other JCPOA sides’ met their obligations to the nuclear deal,” he said.

“The US imposed sanctions on Iran but why has UK entered the issue? why did it detain the Iranian oil tanker? The British have stolen the Iranian vessel and we do not know the reason,” Larijani said.

He noted that “the security of the region will be ensured by regional countries and interference of other countries will bring some predictable dangers to the region.”

The Omani FM, for his part, referred to Iran-Oman cooperations in the past, saying “we are on the same track and have the same goal i.e. ensuring regional security.”

“We do believe that Iran acts reasonably and plays a significant role in ensuring the security of the region,” he said.

“Unfortunately, some unreasonable leaders are ruling the world thus we should cement our cooperation,” bin Alawi added.