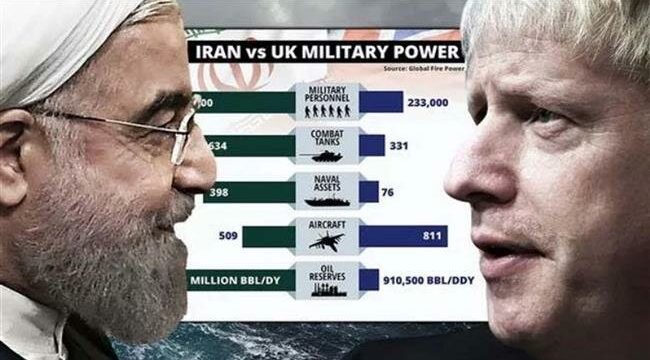 Press TV – The UK’s Daily Express paper has published a report, featuring a “shock chart”, illustrating that Iranian military strength may overpower that of Britain in various key aspects.

“A comparison of the UK and Iran’s military strength shows Britain falling behind when it comes to manpower, land and naval strength and petroleum resources,” reported the paper on Saturday.

The report cited data released by the Global Fire Power (GFP) group, demonstrating that Iran held a better standing among much of the criteria commonly used to compare a country’s potential strength for a potential military standoff.

The paper highlighted that Iran benefited from a superior number of military personnel, combat tanks, naval and artillery assets, along with nearly 40 million people fit for service, nearly double the amount of people available to the UK.
Image showing part of a chart published by the Daily Express illustrating a comparison between Britain and Iran’s military capabilities.

The paper noted, however, that Britain had more superior air power compared to Iran.

The comparison is, however, far from being a comprehensive one, relying solely on a rudimentary and numerical analysis of military strength. The comparison also leaves out asymmetrical military capabilities, a key factor in Iran’s defense doctrine.

The UK paper published the report citing fears of a probable military confrontation between the two countries.

The seizure was made on alleged suspicions that the vessel may have been carrying crude oil to Syria, which has been under EU sanctions since 2011.

Iran has vehemently condemned the move as “maritime piracy” and has vowed to employ all its political and legal capacities to secure the release of the vessel and uphold its rights.

London has since denounced the Iranian measure as “unacceptable”, calling for the formation of a European-led mission to the Persian Gulf to ensure “safe passage” in the region.

Following Britain’s Cabinet reshuffle on Wednesday, London has yet to provide specific plans for the announced mission, with some observers casting doubt on the plausibility of the initiative.

Despite the provocations, Iranian officials have stressed Tehran’s determination to find a political solution and lessen tensions between the two countries.

The tensions come as London and Tehran have also been logged in another political dispute, with a top British court dismissing a complaint lodged by Iran seeking at least £20 million in interest for a debt related to a series of defense deals signed before the Iranian revolution of 1979.

According to Iran’s ambassador to Britain Hamid Baeedinejad, the court ruling is related only to Iran’s claims about the withheld debt’s interest post 2008.

A previous ruling had confirmed Iran’s right to interest related to the withheld debt up till 2008.

Britain has, however, repeatedly refrained from paying the debt it acknowledges it owes to Iran, citing illegal sanctions imposed by the United States on Tehran.