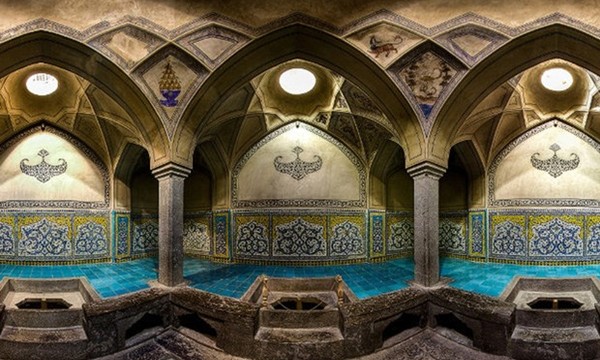 Restored creamy tiles to be reinstalled on Iranian architecture masterpiece

Tehran Times – Some two eighths of delicately floral tiles, which for centuries adorned the creamy dome of Sheikh Lotfollah Mosque, have been restored and are ready to be reinstalled on the monument that is widely known as a masterpiece of Iranian architecture.

This phase of the restoration project entails two eighths of the dome’s surface (the dome has been divided into eight portions), and its associated glazed tiles have been fully restored and are ready to be reinstalled, Isfahan province’s tourism chief Fereydoun Allahyari said on Tuesday, CHTN reported.

The mosque is very famous for having a very picturesque dome that makes extensive use of delicate yet very intercalate cream-colored tiles, changing color throughout the day from cream to pink. Some say the sunset is usually the best time to witness the change.

“Each of the eight sections is composed of 24,000 pieces of glazed tiles, so in this phase restorers are to install 48,000 tiles on the dome,” the official explained.

The 17th-century Sheikh Lotfollah Mosque punctuates the middle of the two-story arcades that are encircling the enormous Emam Square, itself a UNESCO World Heritage site in Isfahan, central Iran.

In comparison to many mosques scattered across the country, it appears to be relatively unusual, having neither a minaret nor a courtyard probably because the mosque was never intended for public use, but rather served as a worship place for women.

Built between 1603 and 1619 during the reign of Shah Abbas I, the mosque was dedicated to the ruler’s father-in-law, Sheikh Lotfollah, a revered Lebanese scholar of Islam who was invited to Isfahan to oversee the king’s mosque (now the Emam Mosque).

The exterior panels boasts collections of arabesques and floral designs that have become a signature motif of the masterpiece. The portal itself contains some stalactite-type stone carving used to decorate doorways and window recesses with rich concentrations of blue and yellow motifs.

Inside the sanctuary, there are thousands of mosaics that adorn the walls and its extraordinarily gorgeous ceiling that features a series of shrinking, yellow motifs, itself a masterpiece of design. Photography is allowed but using a flash is not.

Also known as Naghsh-e Jahan (“Image of the World”), the Emam Square is a public urban square in the center of Isfahan, a city located on the main north-south and east-west routes crossing central Iran. The square is anchored on each side by four magnificent buildings: to the east, the Sheikh Lotfallah Mosque; to the west, the pavilion of Ali Qapu; to the north, the portico of Qeyssariyeh; and to the south, the celebrated Emam Mosque.

According to UNESCO, the Emam Square was at the heart of the Safavid capital’s culture, economy, religion, social power, government, and politics. Its vast sandy esplanade was used for celebrations, promenades, and public executions, for playing polo and for assembling troops.