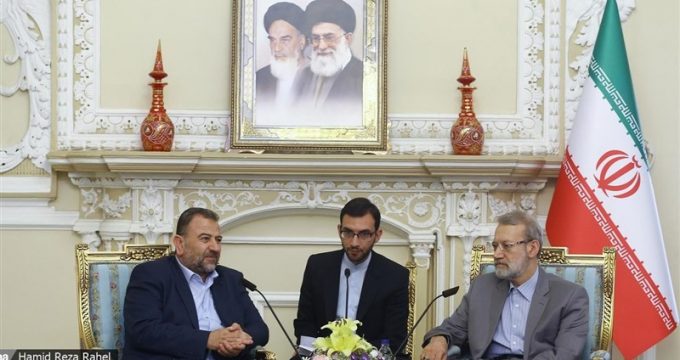 “The Islamic Republic of Iran’s policy is always to support the oppressed people of Palestine and it pursues the Palestinian issue with full sensitivity,” Larijani said at a meeting with Deputy Head of Hamas’ Political Bureau Saleh al-Arouri in Tehran late on Tuesday.

Larijani further described the US government’s “deal of the century” plan as “failed from the beginning” and said, “Except for a few Arab states, no country took this issue seriously especially because Trump, whose weakness is his market-based foreign policy, does not have an acceptable position in the international arena.”

He went on to say that Iran regards supporting Palestine as an Islamic duty, adding, “The path of resistance should be followed and this is the only way to make the enemies of Palestine regret (their moves against it).”

The Hamas official, for his part, expressed satisfaction at his visit to Iran and said, “Today the region is in a sensitive and difficult situation.”

“Therefore, we should rise the level of our convergence and prevent Israel and the US from infiltrating into the region,” he added.

In the Eid al-Fitr sermons in Tehran last month, Leader of the Islamic Revolution Ayatollah Seyed Ali Khamenei said the US-Israeli plot against Palestinians is doomed to failure and will never materialize.

Decrying the US deal of the century conspiracy, the Leader said the betrayal of the cause of Palestine by some Muslim countries, including Bahrain and Saudi Arabia, has provided the grounds for “the evil plot”.

The deal of the century will never materialize, Ayatollah Khamenei said, expressing gratitude to some Arab countries and the Palestinian groups that have voiced their opposition to the deal.

The deal of century ploy, fronted by US President Donald Trump’s son-in-law Jared Kushner, has already been rejected by the Palestinians, who say the White House’s policies have been blatantly biased in favor of Israel.

Palestinians have cut off all contacts with the Trump administration since the president broke with decades of bipartisan policy to recognize al-Quds (Jerusalem) as the capital of Israel in December 2017.