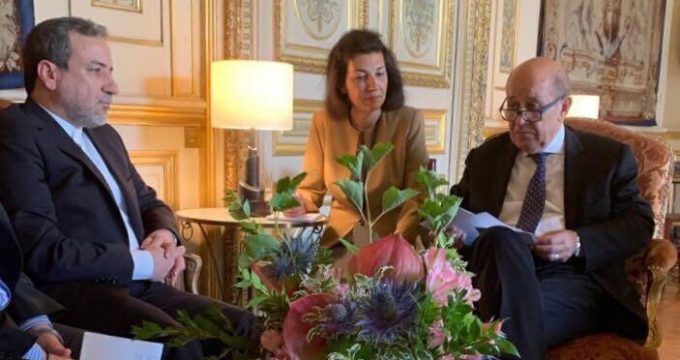 Araghchi: Iran will not allow sabotage in international shipping

He made the remarks in a meeting with French Foreign Minister Jean-Yves Le Drian, Araghchi.

He criticized the states parties to the Joint Comprehensive Plan of Action for renegade on their commitments, saying that Iran has put on the agenda decreasing its commitments based on its rights envisaged in the context of the Agreement.

The diplomatic paths are still open, he reiterated.

Appreciating the efforts made by France and the French President Emmanuel Macron to save the JCPOA, Araghchi said that Iran will spare no efforts for maintaining security in the Persian Gulf and especially in the Strait of Hormuz and will never permit sabotage in shipping procedure in the region.

Elsewhere in his remarks, he pointed to US economic war against Iran, saying US has targeted all Iranians with its illegal and unfair sanctions.

Europe is expected to adopt clear stance against US policy with regard to US attempt to zero Iran’s oil sale which is being followed up in the framework of maximum pressure strategy against Iran, he noted.

He reiterated the fact that Iran will continue exporting its oil under any circumstances.

Meanwhile, Le Drian cited the latest developments and the diplomatic contacts between Iran and France, saying Araghchi’s visit and negotiations between two sides are constructive.

Despite the fact that implementation of the Instrument in Support of Trade Exchanges (INSTEX) was a long process but it was an important political step.

Araghchi left Tehran for Paris on Tuesday to deliver a message from President Hassan Rouhani to French President Emmanuel Macron.