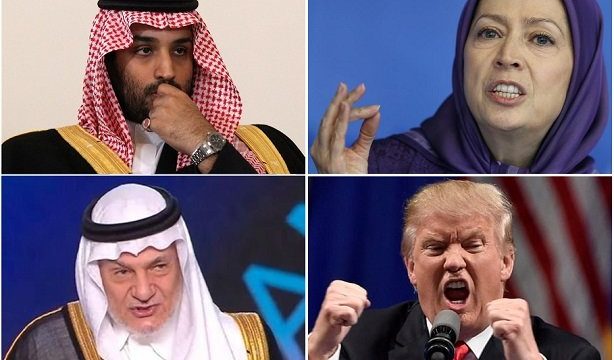 MNA – According to tweets of the French consul general for Alquds (Jerusalem) Pierre Cochard, the Ring leader of the terrorist Mojahedin Khalq Organization (MKO) Maryam Rajavi has traveled to Tel Aviv to negotiate anti-Iranian measures with the Israeli regime’s PM Benjamin Netanyahu.

“I was surprised today by the news received from a former colleague with whom I worked in Tehran; Maryam Rajavi, the co-leader of the People’s Mojahedin Organization of Iran (PMOI) visited Israel,” he tweeted on July 17.

“On July 17, Mrs. Rajavi left Tirana to join Tel Aviv. This trip was arranged through Rudy Giuliani, the personal advocate of President Trump and Boaz Rodkin, the Israeli Ambassador to Albania,” he added.

“Mrs. Rajavi is likely to meet Yossi Cohen, the director of Mossad who has already cooperated with the Mujahideen on the Iranian nuclear issue. During her trip to Tel Aviv, Mrs. Rajavi will also meet with the Prime Minister of Israel,” the French diplomat wrote on the same day.

“Mrs. Rajavi holds the title of Political Refugee in France. Her talks with the Jewish State have not been authorized by the French Chancellery in Israel,” he noted.

“Mr. Netanyahu announced a few days ago that he will soon reveal news about the nuclear activities of the Islamic Republic,” Cochard continued.

The MKO which is said to be a cult which turns humans into obedient robots, turned against Iran after the 1979 Revolution and has carried out several terrorist attacks killing senior officials in Iran; yet the West which says cultism is wrong and claims to be against terrorism, supports this terrorist group officially.

After the Islamic Revolution in 1979, the MKO began its enmity against Iran by killings and terrorist activities.

Maryam Rajavi has been the leader of the sect for more than 25 years, and during these years, no elections, even based on formality, has been held to select the new leader. The sect is ruled through dictatorial arrangements and far from democratic mechanisms. Some members have launched aborted attempts to escape the Liberty Camp, and generally faced with failure, they have committed suicide.

Recently many reports have been revealing the close cooperation between the Saudi and the terrorist MKO officials, too.